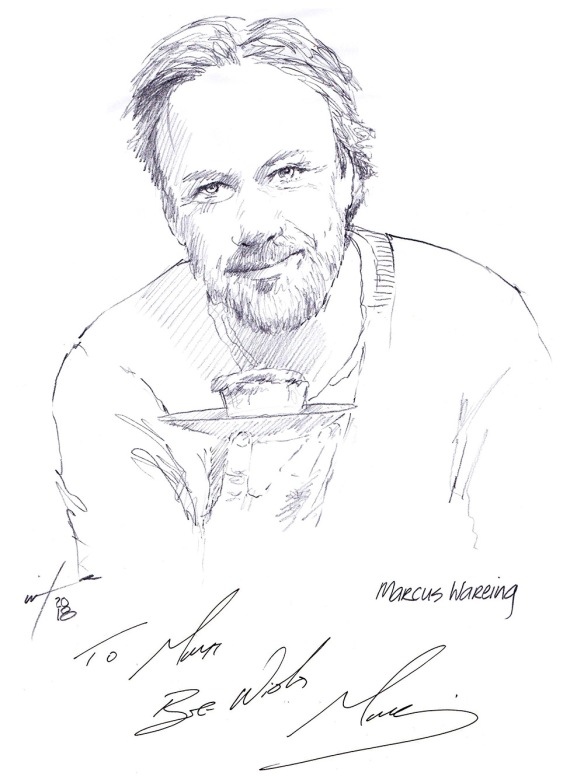 Continuing my combination of vices-cooking shows and sketching – I’ve been on a scribbling spree over the past fortnight, sending my sketches to some of my favourite British chefs.

First back was Marcus Wareing, described as an ‘ambassador for British cooking.’ Since starting his cuisine career at the age of 18, he won his first Michelin star at 26, one of only a handful to do so at such a young age. Marcus and his wife Jane operate three London restaurants, opening the double-Michelin star winning ‘Marcus Wareing at the Beckley’ in Balgravia (now known simply as ‘Marcus’) in 2008, adding ‘The Gilbert Scott’ at the St Pancreas Renaissance Hotel and ‘Tredwells’ in Seven Dials in the West End.

He lists his main value as “excellence without pretence”. Apart from his Michelin stars, Marcus has accumulated a number of accolades, including Tatler Restauranter of the year, GQ Chef of the Year, Catey and Acorn Awards. In 2014 he replaced Michel Roux Jr as a judge and mentor on the TV series MASTERCHEF: THE PROFESSIONALS (UK).

I mailed this drawing to Marcus at ‘Marcus’, which he signed and returned within a couple of days.