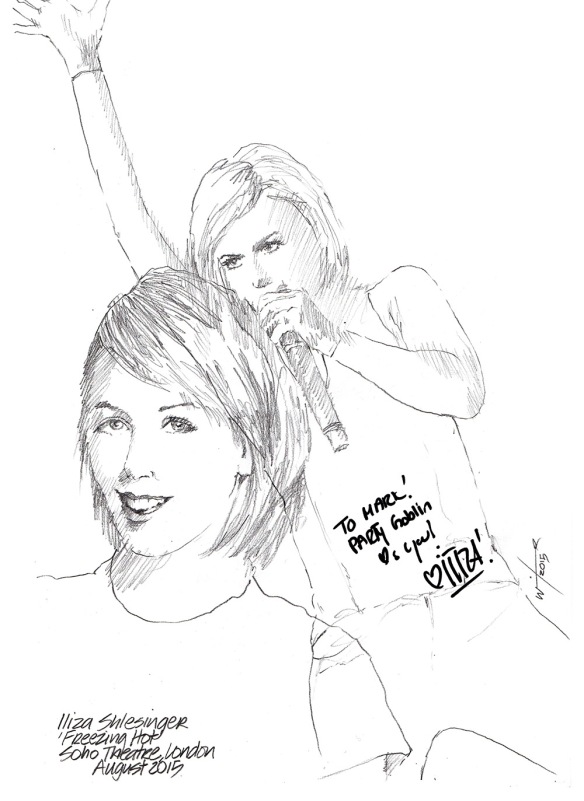 Thirty-two year old Texan Iliza Shlesinger has finally made her UK debut at London’s Soho Theatre, a decade after becoming the only female and youngest winner of the US talent show Last Comic Standing. Her first TV Special War Paint reached Number 1 on the American iTunes chart and her follow-up Netflix Special Freezing Hot received rave reviews. It is the latter that she is performing at the Soho until the end of August, exposing women’s best kept secrets with opinions on things from first date attire, fantasy breakups, the constant pursuit of not being cold while still looking hot to imagining life as a mermaid and the general state of her nation. TimeOut’s Danielle Goldstein wrote, “Dressed from head to toe in black, in jeans tight enough to put the ‘vagina in a chokehold’, Iliza Shlesinger commands the stage…fearlessly delivers embarrassing anecdotes we can all relate to.” ( Note: My sketch does not depict her in black from head to toe…it saves lead and possibly gets me more carbon credits.)

As I have said, laboriously, the Soho can be an awkward venue to nab the sketch subject for a siggy. With three stages, the intimate environs can become overpeopled with patrons toing and froing. In this case, I got a tad lucky. I was seated at a table near the foyer from wence Iliza would hopefully emerge from the downstairs stage. I had planned to finish my Pilsner with a few minutes to spare before strategically positioning myself in, what I call the ‘salmon spawning spot’ (you know, swimming upstream) as the audience emerged.With three sips of my beverage to go, one of the bar staff placed a reserve sign on my table ‘For Iliza, 8.30pm’ it read. Something about Mohammed and the mountain came to mind, but I quickly informed the  barman, as the crowd poured in at 8.31, that I would vacate as soon as she arrived, which she duly did and happily signed my sketch.