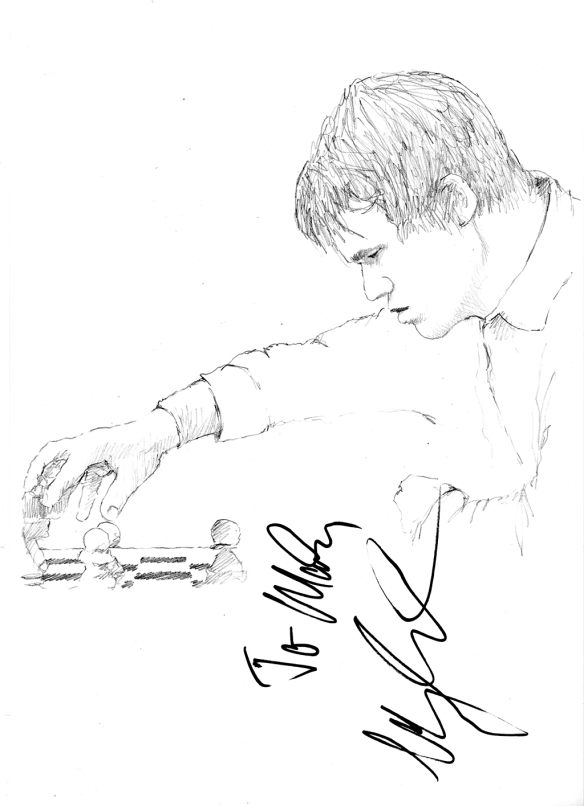 Yesterday I met Magnus Carlsen – the 22 year old Norwegian World Chess No1… well ‘met’ I use candidly. The Telegraph calls him the Justin Bieber of chess. He prefers to be likened to Matt Damon. Actually, he looks more like a condensed, cherub-faced Roger Federer.

He has the highest chess rating of all time and has been called the ‘greatest ever player’ at the tender age of 22. The former chess prodigy became the youngest player to reach number 1 in the world in January 2010. His game style is described as “poetic and brutal” – as you would expect from a Viking!

The World Chess Candidate’s Tournament has the top eight players gathering to do battle over two weeks at the Institute of Engineering and Technology, under the shadow of the Waterloo Bridge in London. The victor will then challenge current World Champion Viswanathan Anand “the Tiger of Madras” for the title. The competition concludes this Easter weekend. With chess having 600 million players worldwide, revamped rules and a new poster boy, many believe the game is returning to the glory days of the Fischer-Spasky confrontation in Reykjavik, Iceland in 1972.

He is the tournament favourite and up until Good Friday he was leading. However, he suffered his first loss to Ukranian Vassily Ivanchuk, leaving a Russian, Vladimir Kramnik in the lead. Challenger hopes could be resurrected on Sunday.

Anyway, back to the meeting and signing. I arrived at the venue with half an hour to go to kick off.. or should I say ‘piece movement’. A sprinkling of photographers and journos wandered into the institute, and a smattering of your usual chess groupies. Not an autograph zombie in sight… I’m alone at last!

With 10 minutes to go I thought he’s probably already in the building working on his moves. But no, he was walking on his moves. I see this mini version of the Fed/Matt Damon hybrid walking towards a side entrance. I race after him, thinking “this is a little weird, chasing after a chess celebrity”.

He and his minder go into one of those doors… oh I would say, 6cm thick, that operate like a bear trap with hinges that are spring loaded. But my fingers on my drawing hand managed to stop the offending barrier from closing completely. As I prised it open to reveal a startled chess champion. Wringing my fingers, but with my Sharpie in my left hand, I asked him to sign my sketch. Clearly not used to such intrusions, his facial expression changed to a smile, and he calmly said “sure,” and signed. Little did I know he was about to suffer his first defeat…

I thanked him a left, still flexing my fingers, bumping into 2 guys directly behind me. I wasn’t sure if they were fans or security. Needless to day, mission accomplished. Checkmate.