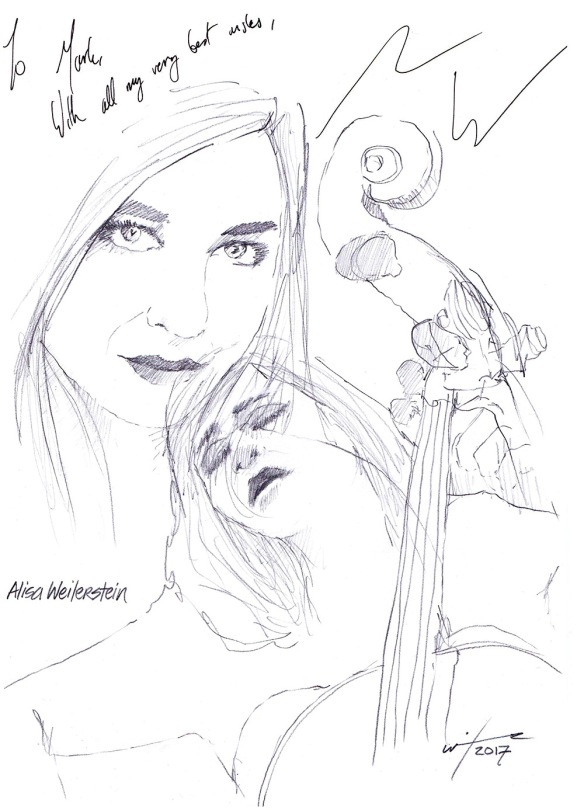 The American classical cellist Alisa Weilerstein is one of the most popular performers on both sides of the Atlantic, appearing with all the foremost orchestras in the US and Europe. Among her many accolades is the 2011 MacArthur Fellowship or ‘genius grant’ which is awarded to American citizens or residents who show ‘extraordinary originality and dedication in their creative pursuits.’

While described as ‘classical,’ Alisa has expanded her cello repertoire and is an ardent champion of new music. She is renowned for her performance energy, ‘natural virtuosity, intensity, spontaneity and sensitivity of interpretation’. 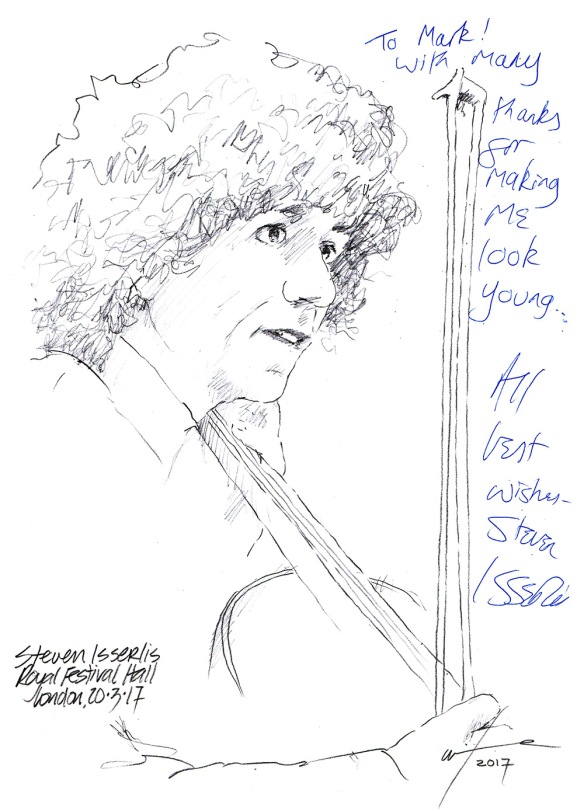 I’ve drawn plenty of violinists but this is my first ‘big violinist’ sketch, or as they like to call it, a cellist and it just so happens to be Steven Isserlis, one of the world’s best. Britain’s greatest cellist, who could pass for a Brian May sibling, is known for his diverse repertoire and distinctive sound using gut strings. It was reported that he has never taken more than three consecutive days away from his cello since he was ten years old. He believes cellos have souls rather than characteristics. “It’s like breathing to me,” he said.

Steven has a calming ritual before a concert. Rehearse in the morning on his Marquis de Coberon Stradivarius on loan from the Royal Academy of Music, have a huge lunch, drink coffee and listen to The Beatles. “It’s  partly superstitious – but my father was Russian so I was bought up with superstition,” he said. Steven performed at the Royal Festival Hall in London where he signed my ‘big violin’ sketch. 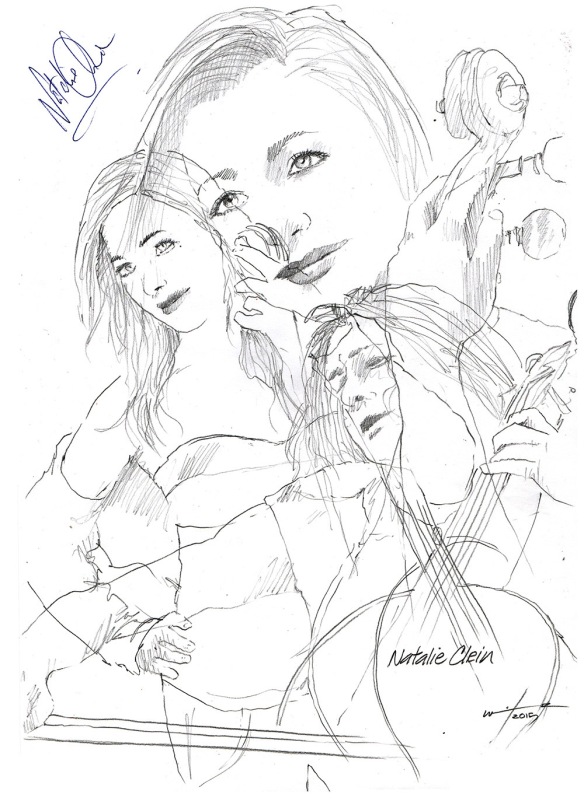 The cello is a member of the violin family…a very big member of the violin family. Although not the biggest, it is the instrument that is the reason for celebrated classical cellist Natalie Clein”s  biggest pet hate, “When I take my cello on a plane, people always ask why I don’t play the flute.” The Brit Award winner isn’t a flautist, she plays one of the biggest members of the violin family and plays it exceptionally well…’mesmerisingly’ and ‘passionately’ well according to The Times. The said cello is a ‘Simpson’ Guadagnini, made in 1777 by the ‘Leonardo Da Vinci  of cello-makers, JB Guadagnini. “I own a small part of it along with 20 other people. It’s like a child, you never really own it, you’re it’s guardian for a while.” she said in a Guardian interview. Speaking of a child, Natalie’s daughter was born last year, so now the large amount of travel makes it more interesting on planes, ‘baby in the front,cello on the back.’

I drew this sketch and left it at the Cadogan Hall in London, where Natalie was performing her latest recording, Saint-Saens: Cello Concerto No 1 with the St Petersburg Symphony Orchestra earlier this year.