No, not the musical duo from the Kentish coast, sorry to disappoint the disciples, but New Zealand’s Barrett Brothers, Beauden, Scott and Jodie, who made rugby history this week, becoming the first trio of sibblings to play for the reigning World Champion All Blacks at a World Cup when they cruised past Canada, 63-0 in their second Pool match at the Oita Stadium in Japan. To add to the occasion all three scored tries. It’s not uncommon for two brothers to play for the hallowed AB’s. There have been 46 sets of siblings who have worn the famous black jersey and there has been three other trios, but they did not play all at the same time or at a World Cup.

They were the first trio of brothers to be selected for an All Black starting lineup XV when all three were picked to play in the first test against France at Auckland’s Eden Park in 2018, a match won by the AB’s, 52-11.

Twenty-seven year-old two-time World Rugby Player of the Year and the oldest, but shortest at 6’2″, Beauden is the most capped and plays at first five-eighth as we Kiwis call it, but internationally known as fly-half although at this World Cup he’s at full-back. Scott (25), the tallest at 6’6″ is a lock forward and at times a flanker on the side of the scrum. The youngest, Jordie (22) is 6’5″ and plays pretty much in every back position, regarded as one of the world’s most skilful utility players. Sport was always in the Barrett DNA. Their father, Kevin played provincial rugby for Taranaki in 167 games and their mother Robyn was a renowned runner, netballer and basketballer. When Kevin retired from the game, he stated that he was “going to breed a few All Blacks”, and indeed he did. Growing up on a dairy farm on the West Coast of New Zealand’s North Island meant they had plenty of ‘backyard’ to practice in.

I found out where the ABs were staying in London last November as they prepared for the Autumn International against England, so quickly did this sketch of the ‘ABarrett Bros’, as I labelled them, and they signed it for me. 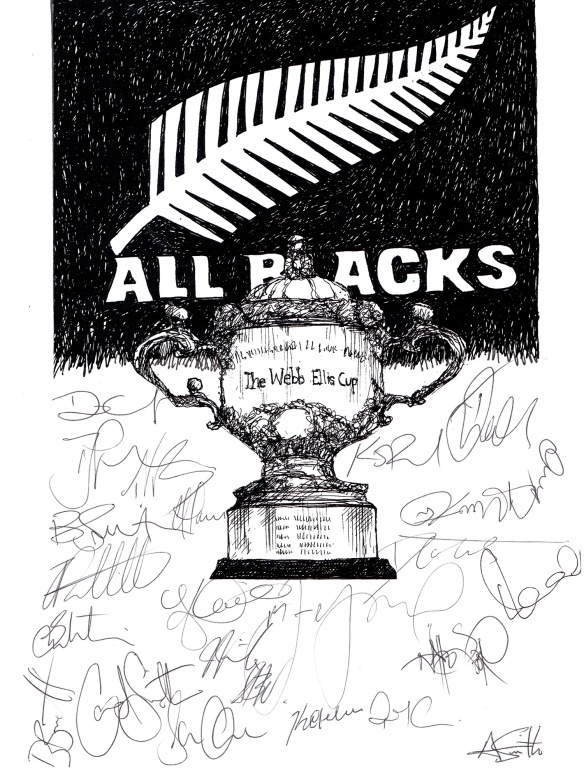 As a proud but nomadic New Zealander living in the UK I couldn’t let this moment go by  without some homage to our mighty All Blacks, winning the Rugby World Cup for the third time and the first team to retain the Webb Ellis Cup, beating our noisy neighbours Australia, 34-17 in the final at Twickenham on Saturday.

Since becoming the World Champions in Auckland in 2011, they have only had three loses in 53 matches, holding the Number 1 ranking for the past decade. The world’s media have labelled them the greatest rugby team of all time, some saying the greatest team in the history of sport. “Phenomenal doesn’t do them justice,” one scribe wrote.

Rightly so, they also picked up the Best Team trophy at the annual World Rugby Awards for the sixth successive with legendary playmaker Dan Carter winning Best Player after his mercurial Final and final performance, scoring 19 points with the boot, a fitting end to his unparalleled career.

I drew this image of the Cup with the All Blacks iconic silver fern, leaving space for the team – 31 of them – to hopefully sign… and hopefully the winning team. They arrived at the Tower of London for the official welcome to the tournament six weeks ago. Given the history of the venue, some thought the hosts may have had other ideas.

Knowing the chances of me obtaining the entire team at that event were less than minimal, I delivered it to the AB’s long-time manager Darren Shand, who had helped me in the past with previous requests and as sure as God made little green apples (and the All Blacks) he got the job done, like his team in the World Cup. I just had to mention that again.

A photo of All Black impact weapon Sonny Bill Williams consoling his opposite number Jesse Kriel and helping him to his feet after the New Zealanders nail biting 20-18 win over the Springboks in the World Rugby Cup semi-final thriller at Twickenham last weekend went global, adding a poignant perspective to sporting rivalries. It was reminiscent of another Kiwi show of sportsmanship this year, also in a World Cup semi-final and also against South Africa. Black Caps all-rounder Grant Elliot, who hit the winning runs was photographed consolling the Proteas quick Dale Steyn after the epic match.

Sonny Bill told Jesse that he had nothing but respect for him and that he had played well throughout the tournament and will be around for many more.After the game he said that the result could have gone either way and that could have been us. Fellow AB Liam Neeson tweeted in admiration, “Never look down on anybody unless you’re helping them.” It was not Sonny Bill’s only act of compassion. The first Muslim to play for the All Blacks offered his player tickets to Syrian refugees. While he may divide public opinion back in New Zealand, I’m sure all us kiwis both at home and abroad have nothing but admiration for him this week.

Not quite on the same humanitarian level, but equally appreciated by me was his signing and ‘best wishes’ dedication on this sketch, which AB manager Darren Shand organised for me.  The original is drawn with my trusty 4B, which is a soft lead and prone to smudging. Sometimes when people are signing they indadvertedly do this, but generally leave it as part of the process. Sonny Bill’s right eye on the left image got the treatment, but who am i to argue with a champion boxer.  I’m hoping the very hand used  will produce a trademark offload against Austraila in this weekend’s Final and hold the Webb Ellis Cup as World Champions again. If not, I still have a great sporting trophy of my own. 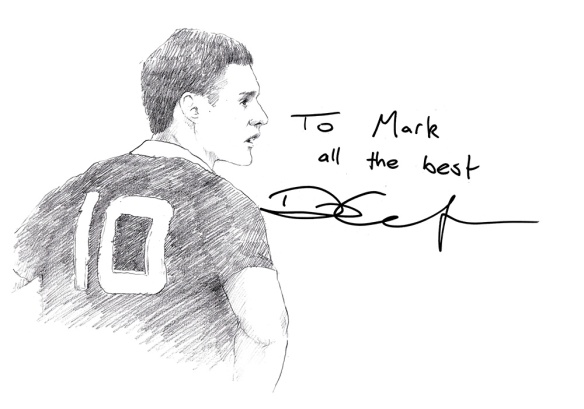 All Black fly half Dan Carter is arguably the world’s best number 10, winning the IRB World Rugby Player twice (2005 and 2012) from four nominations.

He is the mighty All Blacks greatest points scorer with 1,455 points and the fifth All Black to win 100 caps in November 2013 when New Zealand defeated England 30-22 at Twickenham.

London’s Guardian described Dan’s play as, “the definitive fly half display of the modern era”

Dan signed my sketch at the team’s hotel in London this month when they took on England in the end of the year tour match.

The outstanding Richie McCaw, considered the greatest New Zealand rugby player of all time, will become the first player to lead the famous All Blacks in 100 matches when he captains the legendary team at the Millennium Stadium against Wales this weekend.

It’s a fitting venue for the milestone. Nearly 10 years ago to the day, a 23-year-old Richie was handed the captain’s armband for the first time at the Cardiff ground in a nail-bitting 26-25 victory over a strong Welsh side. With 137 Test appearances, he is the most capped All Black and now becomes the solo member of the 100 Captain’s Club. Richie is the most celebrated rugby player in the world, winning the IRB International Player on a record three occasions from eight nominations.

During his tenure as captain the All Blacks have won the Team of the Year seven times and are expected to add to that at this year’s Awards. The only remote thing I have in common with the great man, apart from our Kiwi ancestry is our attendance at Otago Boy’s High School in Dunedin (although not at the same time). It was not mentioned as he signed this ‘energetic’ 4B pencil sketch at the team’s hotel in London before they played England a couple of weeks ago.