I have a 50% success rate when it comes to sending stuff to Broadway Theatres for signatures, so I was very happy to receive my sketches back from Catherine Zeta Jones and the legendary Angela Lansbury in February 2010.  Both were starring in Stephen Sondheim’s 1973 musical A Little Night Music at the Walter Kerr Theatre. And both were nominated for a Tony Award, with Catherine winning for Best Actress in a Musical, a category Angela had previously been nominated in 4 times, winning on each occasion. For this production Angela was nominated for Featured Actress in a Musical. She didn’t win, but had won in the same category in 2009 for Blithe Spirit. 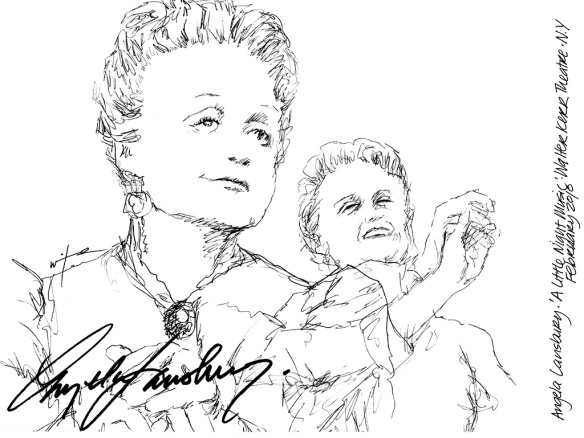 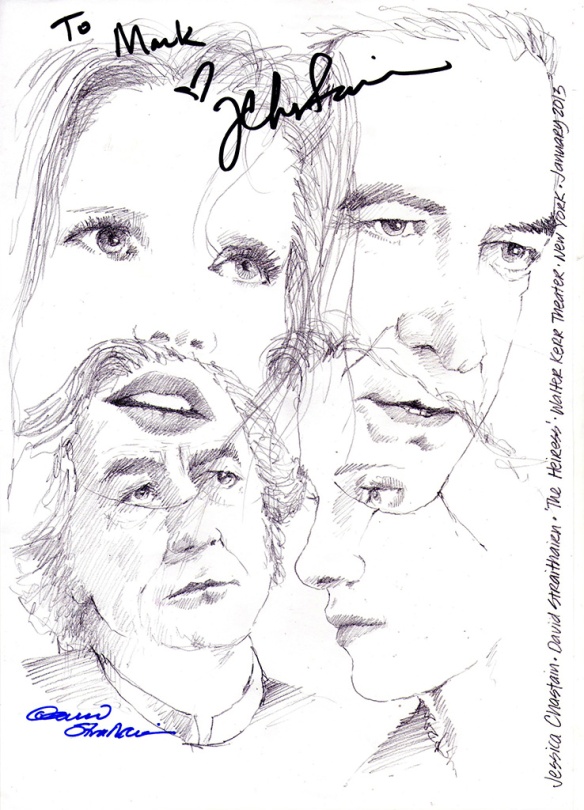 Sending sketches for signing to Broadway productions in New York can be a bit ‘hit and miss’… a bit like the shows themselves. My success rate is about 50/50. Some theatres (theaters in Yankie lingo) pass them, some don’t. In January I sent material to three theatres for signing, so it was pleasing to receive this on back on Saturday.

Jessica Chastain was making her Broadway debut in the revival of the Tony award-winning play The Heiress at the Walter Kerr Theater. The production was scheduled for a limited run, opening in the Autumn of 2012 with final curtain on 10 February 2013, after 27 previews and 118 regular performances.

The story of The Heiress is set in the 1850s. Jessica plays Catherine Sloper, the daughter and only heiress of a prominent New Yorker (played by David Strathairn), who must navigate the terrain of love and regret, desire and duty against the demands of an emotionally distant father and the attention of a passionate young suitor.

Jessica has always been pleasant on the few occasions I had met her at London premieres and award ceremonies. Someone wrote that as a vegan, she wanted everyone to feel that they were welcome on this planet… including signature stalkers (some latitude used in the paraphrase). So no surprise when I opened up the envelope and it was from her.

In 2012 Time Magazine listed her as one of the ‘100 Most Influential People in the World’ and she is considered one of the finest actors of her generation. Jessica was also nominated for every award going for her role as Maya in Kathryn Bigelow’s Military thriller Zero Dark Thirty. The Award’s Season coincided with the play’s season, so her understudy saw more action as Jessica attended the various ceremonies.

The Heiress actually closed a day earlier (Feb 9th) to allow Jessica to attend the BAFTA Awards in London on the 10th.

Academy Award nominated and Emmy Award winner David Strathairn has also signed the sketch. His Oscar nomination was for his role in as Edward Murrow in Good Night and Good Luck. He also has a prominent role as Secretary of State William Seward in Steven Spielberg’s Lincoln.

To demonstrate further Jessica’s love for all things living, she rescued a three-legged dog called Chaplain from a New York dog shelter. A the most climatic point in The Heiress deep in the second half on a February Saturday matinée, Chaplin walked on stage… unexpectedly. He has not signed the sketch, however.