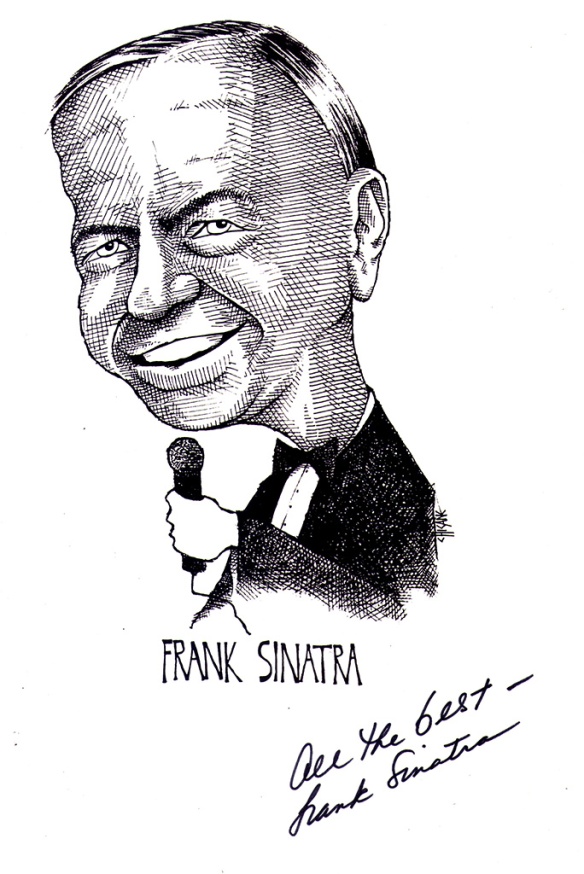 Francis Albert Sinatra was one of the best selling artists of all time, winning eleven Grammy Awards and a much sought after siggy for a collector. He also won a Best Supporting Actor Oscar for his role in From Here to Eternity (1953). Elton John said that Sinatra, “was simply the best – no one else even comes close.”

In July 1974 he visited Oz, after 15 year absence. “A funny thing happened in Australia. I made a mistake and got off the plane,” he said. After calling local female journalists “a buck and a half hookers” and refusing to apologise, the ACTU blacklisted him, which threatened to end the tour. It was only the intervention of Union Chief – and later to become Prime Minister – Bob Hawke to restore normality that meant Sinatra could finish the gigs. He vowed never to return.

However, he was persuaded to do so for a concert in Queensland’s Sanctuary Cove by Clive James on 9 January 1988. I drew this caricature and sent him the original and a couple of copies to be signed at the venue. He kept the original and both copies were returned, signed…. but by who?

The number of autograph requests Sinatra received during the latter part of his career was overwhelming. A succession of secretaries, including Gloria Lovell and Dorothy Ullmen became adept at mimicking his graph and signed many items on behalf of the ‘chairman of the board’. It’s highly likely that this is not handwritten by him… but you never know!

He died in 1998 and written on his gravestone is the inscription, “The Best is Yet to Come