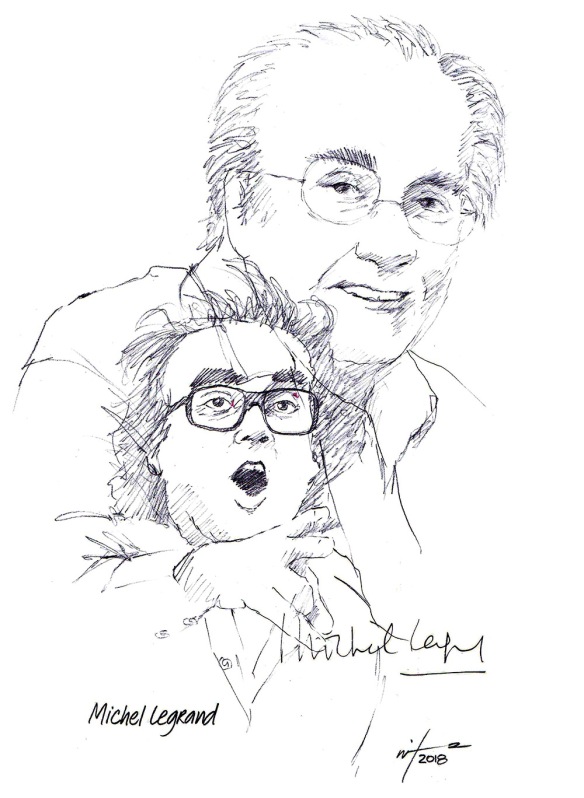 In musical terms there are few bigger names than Michel Legrand. The celebrated Frenchman, known for his ‘often haunting, jazz-tinged film music’ has composed nearly 200 movie scores, winning every accolade going, including three Academy Awards, 5 Grammys and a Golden Globe.

One of my favourite songs, ‘Windmills Of Your Mind’ from THE THOMAS CROWN AFFAIR and sung by Noel Harrison, won the Best Song Oscar in 1968. He seems to have worked, at one time or another with practically every figure of consequence in popular music and film since the end of the Second World War. His theatre work has also been recognised with a Tony nomination for AMOUR and he even has an asteroid – 31201 michellegrand – named in his honour.

The 86 year-old performed for the first time in the UK last month at the Royal Festival Hall, when he conducted and played the piano with the Royal Philharmonic Orchestra, or as it was dubbed on the night, the ‘Michel Legrand Big Band,’ celebrating 60 years of his most cherished film scores.

In his review for London Jazz News, Andrew Cartmel summed up the experience in one paragraph, “ICE STATION ZEBRA demonstrated the mastery of film composition that Legrand had achieved as early as 1968. The pointillist mystery of the introduction, comprising cross-hatched strings and glockenspiel, yielded to supple shoots of wood winds springing up, subtly and adroitly conjuring the mood before the brass section injected a stab of menace… Legrand’s music remains compelling, absorbing and masterful.”

It was an honour to have Monsieur Legrand sign my drawing at the venue.