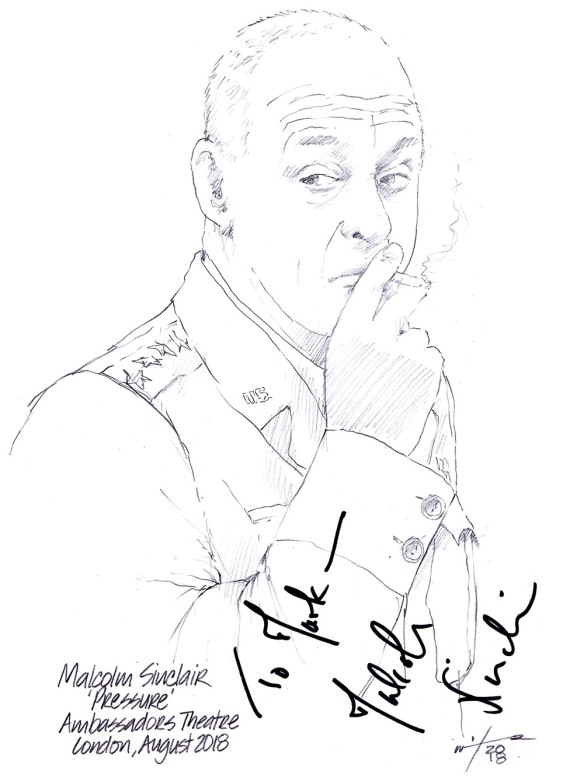 English actor Malcolm Sinclair has played an extensive number of film, television, radio and theatre roles since the 1980’s, including his Olivier-nominated portrayal of Major Miles Flack in the Donmar Warehouse 2001 revival of PRIVATES ON PARADE.

His latest is General Dwight D.Eisenhower in the West End transfer of David Haig’s PRESSURE, at the Ambassadors Theatre. The war weather play with its multifunctional metaphorical title is a superb dramatisation of the preparations for Operation Overlord
and the D-Day landings during WWll. It centres on the tension between wartime meteorologists, Scotsman James Stagg ( David Haig) and American Irving P. Klick ( Philip Cairns), who are advising ‘Ike’, the chain-smoking supreme commander of the Allied Expeditionary Forces, on the weather forecast for the Normandy invasion.

Malcom, like David, has been with the production since it originated at the Lyceum in Edinburgh in 2014, moving to the Chichester Festival Theatre before a National tour followed by a run at London’s Park Theatre before finally settling into the West End where it finishes this weekend.

In her 2014 Review for the Evening Standard, Fiona Mountford wrote, “Cracking performance from Malcolm Sinclair. He is an actor of commanding presence who can chill a theatre merely by walking on stage and he does that here.” In his Guardian review for this year’s West End transfer, Michael Billington said, “Malcolm Sinclair is exemplary as Eisenhower.”

I caught up with Malcolm when he arrived for last Saturday’s matinee I addressing him as ‘Mr President’ in reference to his character’s elevation to the US Presidency, not knowing at the time that he was also the former President of the Actors Equity for the past eight years. Either way he signed my Ike sketch.