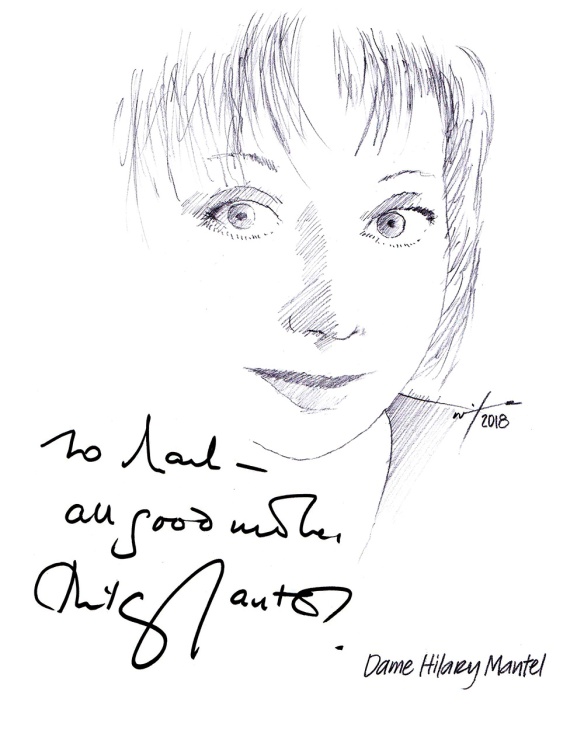 The final signed sketch in this week’s writers series is Dame Hilary Mantel, who I was lucky to meet after her second appearance at the Man Booker 50 Series, the weekend long festival dedicated to the 50th anniversary of the Man Booker Prize at various venues in London’s Southbank Centre. Dame Hilary has won the Booker twice-the first British author and only woman to win it more than once.

In 2009 WOLF HALL, the fictional account of Thomas Cromwell’s rapid rise to power the court of Henry VIII collected the award and three years later the sequel to the dark Tudor tale, BRING UP THE BODIES repeated the win.

The third instalment in the Cromwell trilogy, THE MIRROR AND THE LIGHT is in progress. Described by the judges as an “extraordinary piece of storytelling”, this very modern novel, which happens to be set in the 16th Century, the 650 page WOLF HALL was also one of the five shortlisted books for the special one-off Golden Man Booker anniversary prize, to select the best work of fiction over the five decades of Britain’s most prestigious literary accolade.

I managed to catch Dame Hilary as she left the Purcell Room on Saturday afternoon , where she signed this quick portrait sketch for me.