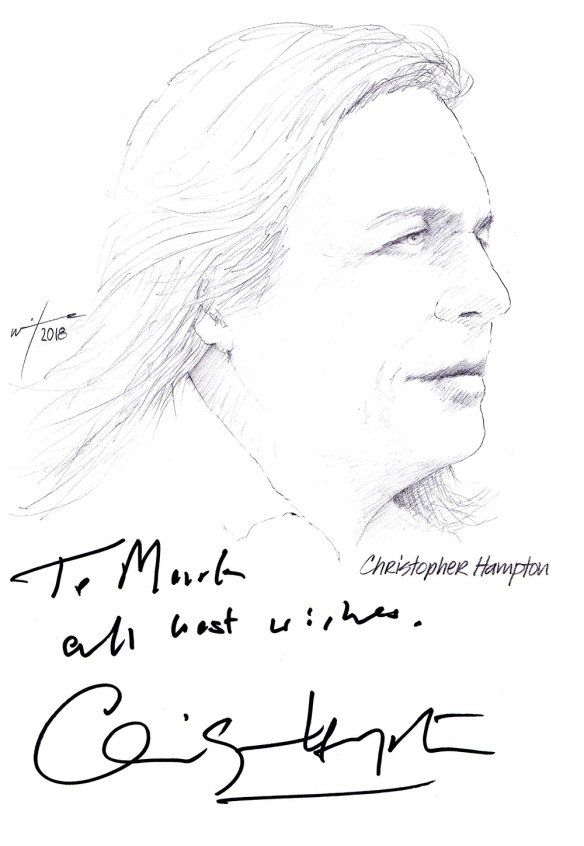 I had always missed Christopher Hampton at various play openings and other events around London over the past few years. He was someone I really wanted to meet. When I heard he was part of the ‘Page to Screen’ panel at last weekend’s Man Booker 50 festival I quickly did this sketch and made my way to the Queen Elizabeth Hall on London’s Southbank on Saturday afternoon. Although Chris has not won a Booker Prize, he has pretty much won everything else.

The celebrated British playwright, screenwriter and translator’s 1985 play of seduction and revenge, LES LIAISONS DANGEREUSES, adapted from the 1782 novel of the same name by Pierce Choderlos de Laclos, won the Olivier Award for Best New Play after its run at The Pit theatre in the Barbican and a Tony nomination when it transferred to Broadway’s Music Box Theatre.

The film version, DANGEROUS LIAISONS directed by Stephen Frears collected multiple awards. Chris won both the Oscar and the BAFTA as well as the London Critics’ Circle and the Writers Guild of America Awards for his screenplay adaption. In 1995 he won two Tony Awards; Best Original Score and Best Book of a Musical; for Andrew Lloyd Webber’s SUNSET BOULEVARD.

The stage door at the Queen Elizabeth Hall, or as the Southbank Centre people like to call it, the ‘Artists’ Entrance’ is tucked away around the back of the venue between it and the British Film Institute in a concrete canyon opposite a multi-storied car park. A tricky place to find, as an acclaimed writer found out. However, for stalkers armed with sharpies, it’s an essential part of our MO.

When I saw a person who looked lost and more importantly, looked like my drawing, I was able to use my sense of direction for mutual gain, assisting Chris to the said entrance in return for signing the said rendering. Reciprocity is always a good thing in this business… plus we had a nice chat as I helped him successfully complete his journey.