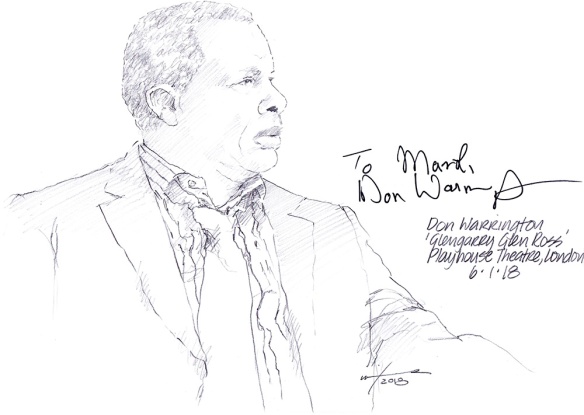 Trinidadian-born British actor Donald Williams graduated from The Drama Centre in London’s Kentish Town, taking the stage name Don Warrington. His professional stage debut was at the Hampstead Theatre in 1973, playing Philip Smith in Eric Chappell’s THE BANANA BOX, opposite Leonard Rossiter and France de la Tour, which transferred to the West End and then became the classic TV sitcom RISING DAMP, making Don a household name. Since then he has carved an impressive stage and screen career, including his role as Commissioner Selwyn Patterson in the hit BBC series DEATH IN PARADISE since 2011.

He returned to the stage in 2012 with the UK tour of DRIVING MISS DAISY with Gwen Taylor and the lead in KING LEAR at Manchester’s Royal Exchange Theatre in 2016, which theatre critic Claire Allfree wrote was a ‘heartbreaking tour-de-force,’ in the Telegraph. Don is currently appearing at the Playhouse Theatre in the absorbing London revival of David Mamet’s GLENGARRY GLEN ROSS, playing the apprehensive George Aaronow, who has been left behind by the changes in the corporate world. Lacking confidence and self esteem he has plunged to the bottom of the heap in a ruthless hierarchical and cutthroat Chicago real estate office.

I met Don last Saturday when he arrived at the theatre for the matinee performance where he signed this drawing for me.