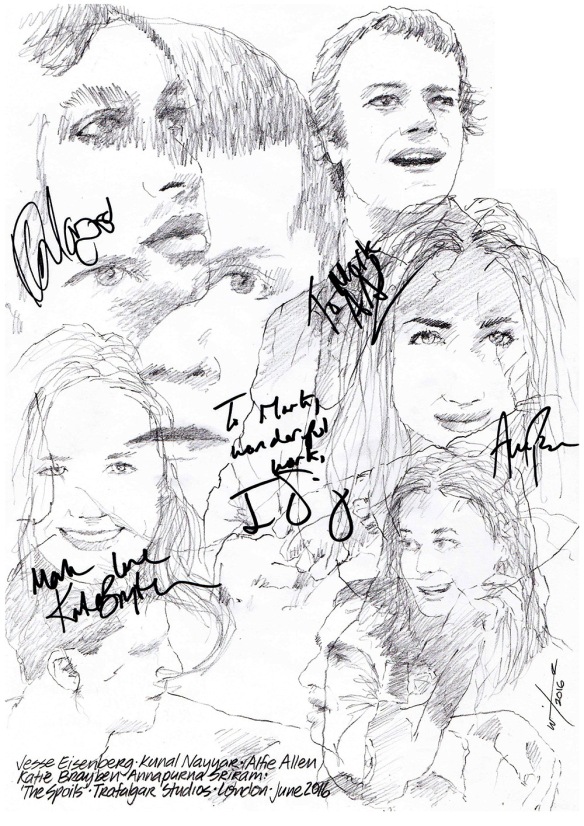 Jesse Eisenberg’s third play, THE SPOILS explores the questions of privilege and the value of family and relationships. The off-Broadway transfer to London’s Trafalgar Studios opened this month to critical acclaim. Jesse, Kunal Nayyar and Annapurna Sriram reprised their roles from the original New York production, joined by Londoners, Alfie Allen and Katie Brayben.

Jesse’s breakthrough performance as Facebook creator Mark Zuckerberg in the 2010 film THE SOCIAL NETWORK saw him nominated for a Golden Globe, the BAFTA and an Academy Award. Kunal is best known as Raj Koothrappali in the CBS hit BIG BANG THEORY. Last year Forbes listed him as the third highest paid TV actor. Alfie plays Theon Greyjoy in the hugely popular GAME OF THRONES and Katie won the Oliver Award for her betrayal of Carole King in BEAUTIFUL: THE CAROLE KING MUSICAL. Brooklyn-based Annapurna was recently seen as host Nicky Tomalin in the sci-fi podcast THE MESSAGE which reached Number 1 on the iTunes Charts.

Jesse signed a sketch for me during rehearsals. This is another drawing of all five cast members, who all arrived at once on Saturday prior to the matinee. It was a bit like London buses, none for a while then five arrived at once, but they kindly took their turn to sign it for me.