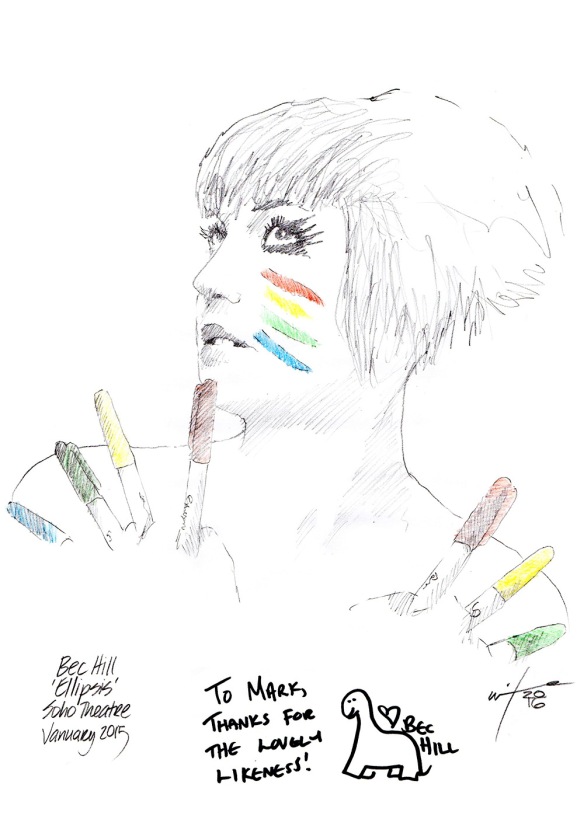 “I used to think an ocean of soda existed, but it was just a Fanta sea.” Just one of Bec Hill’s zillion one-liners in her show ELLIPSIS, which was a sell-out at the Edinburgh Fringe and at London’s Soho Theatre last year.

The pint-sized Australian born, London based dynamo founded the PUN-RUN with her writing partner Gavin J. Innes, the UK’s only pun-based comedy night. It’s an evening of good old fashioned wordplay that takes place bi-monthly at The Phoenix in London’s Cavendish Square.

“My brother and his friends spend all their time floating out to sea. Well, boys will be buoys.” Another one-liner.

The Scotsman called her “exuberant, daft and inventive.” She calls herself “Comedian. Presenter. Dork.” on her website.

Bec’s cult following in Oz, UK and Ireland is due to her award-winning solo shows, Twitter presence and YouTube videos, including delightful low tech animation. She also hosts Sky’s DC FANCAST and is seen on CBBC’s MY DOG ATE MY HOMEWORK. Bec won a golden toilet seat for the nation’s favourite toilet joke.” For Christmas last year I got given Sudoku toilet paper. It’s useless. You can only fill it with number ones and number twos.”

She returned to the Soho this month with her latest show CAUGHT ON TAPE and signed my sketch, incorporating a toon  from her DINOSAUR vid. She decided to sign with a black sharpie, although obviously she had a few colours to choose from.