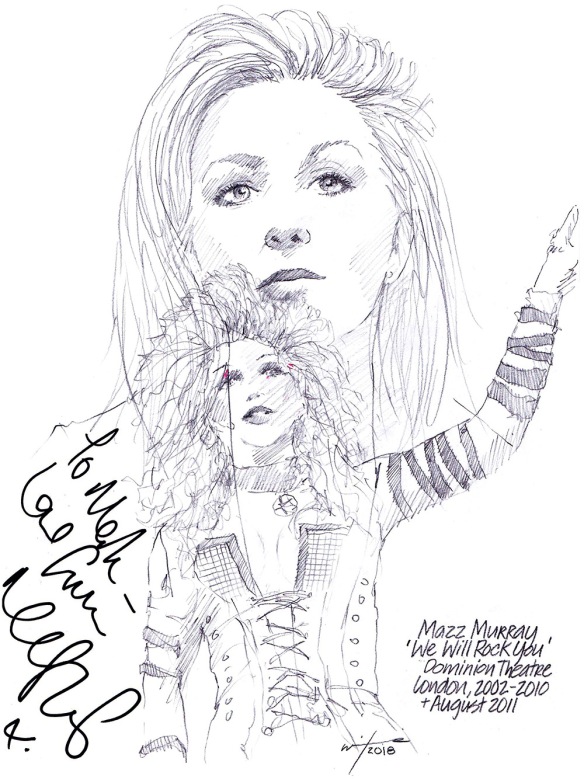 English singer and actress Mazz Murray was the longest-serving member of the cast in the London production of Queen’s rock musical, WE WILL ROCK YOU, joining the original ensemble when the show opened at the Dominion Theatre in May 2002. She took over the principal part of Killer Queen from Sharon D. Clarke in April 2004, remaining until June 2010, becoming the show’s longest-running performer in the role.

She later returned for special two-week farewell season from August 8-2011. In a recent interview, Mazz recalled the Queen’s Jubilee – Elizabeth ll, that is – concert at Buckingham Palace. She got on the wrong coach and ended up walking up the Mall in her PVC cat suit. After the grande finale, the Queen and Prince Charles meet everyone. The Prince leaned into into her and said, “The boys and I saw you walking down the Mall. They were in the car behind me.”

Her other roles include Tanya in MAMMA MIA and is currently Mamma Morton in the London revival of CHICAGO at the Phoenix Theatre. “The good thing about being in musicals,” she continued in her interview, “You’re a superstar on stage for two hours, then you’re in the supermarket the next morning. It’s the best of both worlds, you get your ego massaged, but have a totally private life.” Unless of course you happen to be walking down the Mall in a PVC cat suit in front of a Royal vehicle.

It was great to meet Mazz at the Phoenix Theatre stage door on Saturday when she arrived for the CHICAGO matinee last Saturday, where she signed my sketch. ‘Extraordinarily nice,’ as the lyrics say.