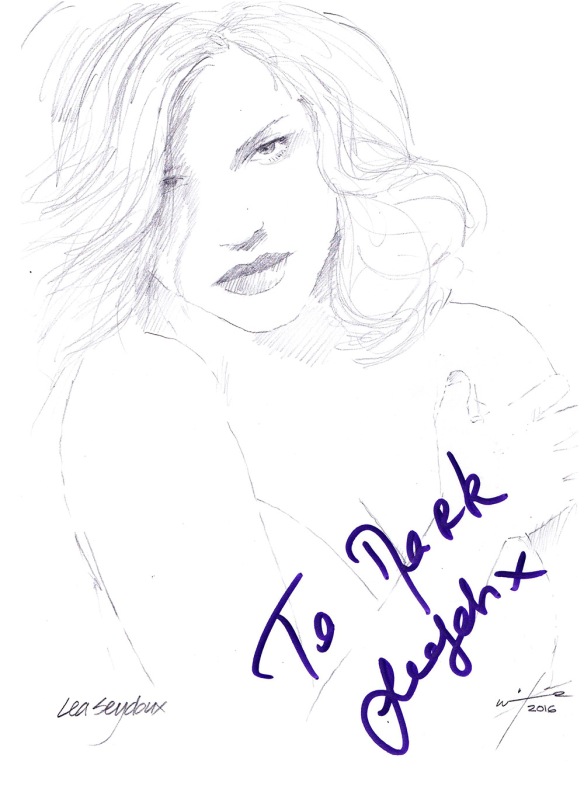 Lea Helene Seydoux-Fornier de Clansonne thankfully condensed her name to Lea Seydoux, which makes it easier and quicker to sign, as was the case last week when the heavily pregnant French actress attended the screening of Xavier Dolan’s IT’S ONLY THE END OF THE WORLD at the 60th  BFI London Film Festival. The film won the Grand Prix and Jury prizes at Cannes this year and will be Canada’s official entry for Best Foreign Language Film at next year’s Academy Awards.

Lea began her career in French cinema, winning the Trouphee Chopard Award given to promising actors at Cannes and receiving one of her many Cesar noms for the 2008 film THE BEAUTIFUL PEOPLE.  Her international break-out role was Emma in the coming-of-age romantic drama  BLUE IS THE WARMEST COLOUR, which won the Palm d’Or. Hollywood blockbusters followed including her role as  Dr Madeleine Swan the ‘main amour’ in the 24th Bond film SPECTRE Peter Bradshaw in his Guardian review described her performance as ‘stylishly played with just the right amount of sullen sensuality.”
It was great to get her to graph my sketch, albeit with a purple sharpie!