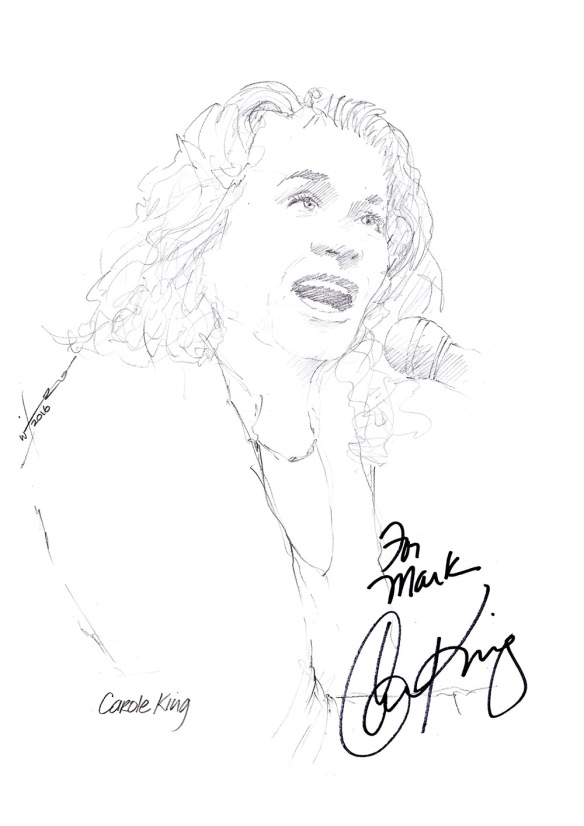 Carole King is one of the most influential songwriters of our time. Her second of 25 solo albums,’Tapestry’ is one of the best selling records of all time with over 25 million copies sold worldwide. It won four Grammy Awards in 1972, including Album of the Year. Carole became the first solo female artist to win Song of the Year (‘You’ve Got A Friend’) and Record of the Year (‘It’s Too Late’). It remained on the Billboard Charts for 313 weeks, second only to Pink Floyd’s ‘Dark Side of the Moon”. Carole has been named the most successful songwriter for the period 1955-1999, writing or co-writing 118 Billboard Chart Hits. She has also taken the same honour in the UK with 61 hits between 1952-2005.

I drew this sketch of Carole last year and hoped to get it signed when she attended the opening of BEAUTIFUL – THE CAROLE KING MUSICAL at the Aldwych Theatre in London in February 2015, but didn’t manage to get there. Carole also played Hyde Park this summer, but it’s a difficult venue to get graphs and stalking hotels is not part of my MO. So I did the old fashioned thing and sent it to her at her production studio in California and it came back signed and dedicated in next to no time.