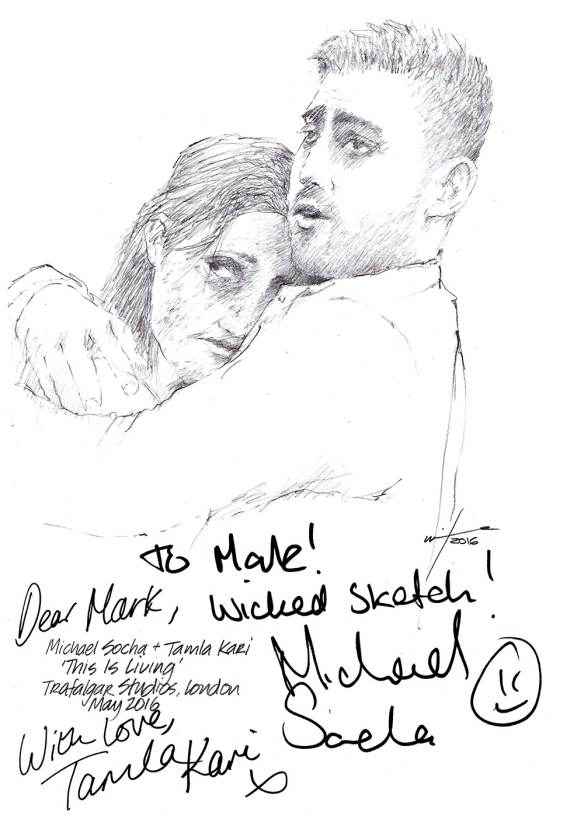 Liam Borrett’s award-winning debut play THIS IS LIVING is a poignant study of what it means to say goodbye. I was lucky enough to say hello to the very affable Michael Socha last week as he retuned to the stage for the first time in eight years. After a sold-out run at the 2014 Edinburgh Fringe Festival the play has transferred to the Trafalgar Studios in the West End. Michael who appropriately plays Michael is joined by Tamla Kari as his wife Alice on a waterlogged stage which mirrors the lake in which she has drowned 12 hours earlier. The couple spend two hours on the bleak, soggy environment delivering one of the unmissable productions of the year. The conversations  between Michael and the ‘unquietly deceased’ Alice explore the grieving process that manages to both break your heart and fill it with joy simultaneously.

Both Actors are best  known for their screen work. Michael as the bully Harvey in the hit film THIS IS ENGLAND and its subsequent spin off TV series and the E4 drama THE ALIENS, and Tamla as Constance Bonacieux in the swashbuckling THE MUSKETEERS and in both THE INBETWEENER films. Both Michael and Tamla appear in the supernatural drama BEING HUMAN.

Michael signed my drawing but I wasn’t able to wait for Tamla on my first visit, so on Saturday I returned to the stage door to complete the task. I had previously met Tamla when she was appearing in VERSAILLES at the Donmar Warehouse a couple of years ago and she signed a sketch for me then. After the matinee Michael popped out to get his sushi and was his usual friendly self, chatting with fans when he not only noticed me but remembered me from the week earlier. I must get rid of the ‘stalker’ tag sharpied  on my forehead. He wasn’t sure if Tamla was coming out, so kindly took the sketch to her and retuned with it signed. Top notch actor and even better bloke.
THIS IS LIVING.