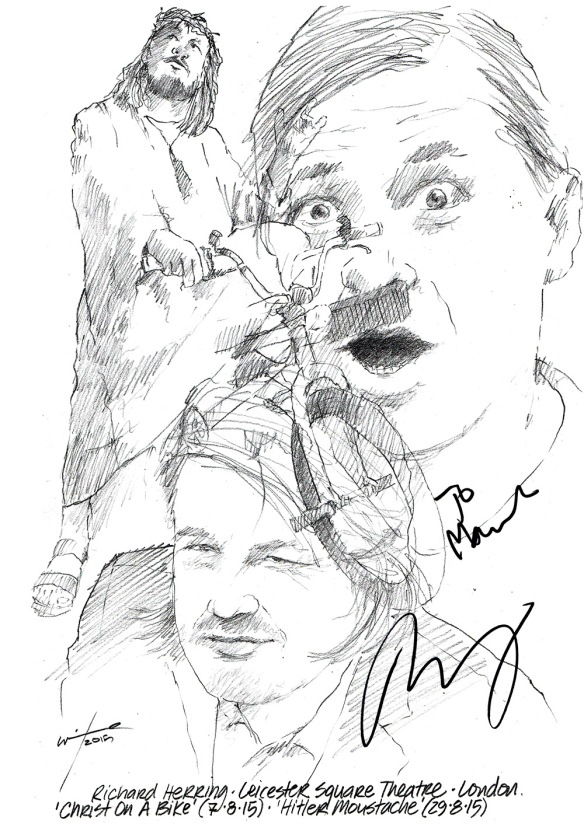 “It’s just not for me,” said comedian,writer,blogger and podcaster Richard Herring when he decided not to join the annual mass exodus of comics from London the Edinburgh Fringe Festival. Described as “one of the leading hidden masters of modern British Comedy” and dubbed the ‘King of Edinburgh’,performing at 28 of the last Festivals, he has decided to ‘boycott’ it and perform a series of 12 shows at London’s Leicester Square Theatre this month. He told The Independent that the globe’s biggest fringe festival  had “changed so much that it’s unmanageable, exhausting and expensive.” Last year 49,497 artists performed at the event. “It’s overcrowded and over-priced,” he said.

Edinburgh’s loss is our gain. Included in Richard’s dozen at Leicester Square are his classics-Christ On A Bike and Hitler Moustache, ending with the premiere of his new hour-long show Happy Now. Running a little late for Saturday evenings performance of Talking Cock, I managed to grab Richard before he quickly slipped inside, equally quickly scribbling a dedication and his economical sig, saying “Sorry I need to be quick…good,” which could relate to the speed of the task or possibly the sketch.

1 thought on “Drawing: Richard Herring in Christ on a Bike and Hitler Moustache”