Test cricket’s two greatest wicket-takers are ‘spinners’ and aggressive lower order batsmen. Australia’s Shane Warne and Muttiah Muralitharan (he prefers to spell it ‘Muralidaran’ because in Tamil the ‘t’ and the ‘d’ sound the same) from Sri Lanka are widely regarded as the greatest bowlers in the history of the game. ‘Warney’ was a right-arm leg-spin bowler who had the ability to turn the ball prodigiously with unnerving accuracy and variation. His signature delivery was the ‘flipper’ – a back spin ball squeezed out of the front of the hand with the thumb and first and second fingers. It drops slower and travels farther, with the extra pace and change of trajectory causing it to ‘pop’.

‘Murali’ was an off-spinner and a leading exponent of the ‘doosra’, spinning the ball in the opposite direction to a normal off break. His career was plagued with controversy and accusations of illegal bowling with his unique delivery style – an unusual hyperextension of his congenitally bent arm. In plain English, straightening the bowling arm during delivery.

Although the ICC cleared him of any illegality, based on biomechanical analysis, many remained unconvinced, including former Australian PM, John Howard, who called him a ‘chucker’. Australian crowds continually taunted him, yelling “No Ball!” after every delivery. It lead to a statement from Murali that he might skip future tours of the country. A ‘Spin Summit’ in July 2009 decided not to use the ‘doosra’ when teaching young bowlers because it was an illegal delivery.

However, this ‘doosra’ delivery was found to exceed the ICC’s elbow extension five degree limit by nine degrees. After research found that almost 99% of bowlers exceeded the limit, the ICC revised it to 15 degrees, allowing Murali to continue using it in his repertoire.

In spite of that, he became the highest wicket taker in both Test and ODIs, taking his 534th wicket in the latter in April 2011.

He took his 800th Test wicket with hi very last delivery against India in Galle in July 2010. Going into the game he needed 8 wickets to reach the milestone. With seven secured and the last two Indian batsmen at the crease, Murali had Pragyan Ojha caught by Mahela Jayawaedeue to take the final wicket and win the match. He ended taking the most 5 (67) and 10 (22) wicket hauls in a match and is the only player to do so against all Test playing countries.

‘Warney’ finished his Test career with 708 wickets at an average of 25.42 in 145 Tests between 1999 – 2007. In ODIs he took 293 scalps in 194 matches, including a man-of-the-match performance of 33-4 to win the World Cup against Pakistan at Lords in 1999. His career was not without controversy either, but for a number of off the field misdemeanours, including a on year ban from the game for taking a banned diuretic just before the 2003 World Cup.

He was one of five, and the only bowler, to be named in Wisden’s ‘Cricketers of the Century’ (2000). The others were Don Bradman,  Sir Jack Hobbs, Sir Garfield Sobers and Sir Viv Richards. ‘Murali’ didn’t make the list, however in 2002 Wisden named him the greatest ever bowler based on statistical analysis. In 2007, the Warne-Muralidaran Trophy was unveiled for future test series between Australia and Sri Lanka.

Murali narrowly escaped death when a Tsunami struck Sri Lanka on Boxing Day 2004, arriving late to a prize giving ceremony in Seenigama. He immediately established the Foundation for Goodness to raise funds to help survivors rebuild homes, schools, sports facilities and computer centres, raising US$4million in the first three years. The ‘Tsunami ODI Cricket Series’ was one of the fundraising events. Shane Warne captained a World XI which included Murali. They played three games in New Zealand against the Black Caps. Both signed my sketches at the Christchurch match on 22 January 2005 and naturally I made a donation to the Appeal – a small price to pay to see the two greatest wicket-takers blowing in tandem. 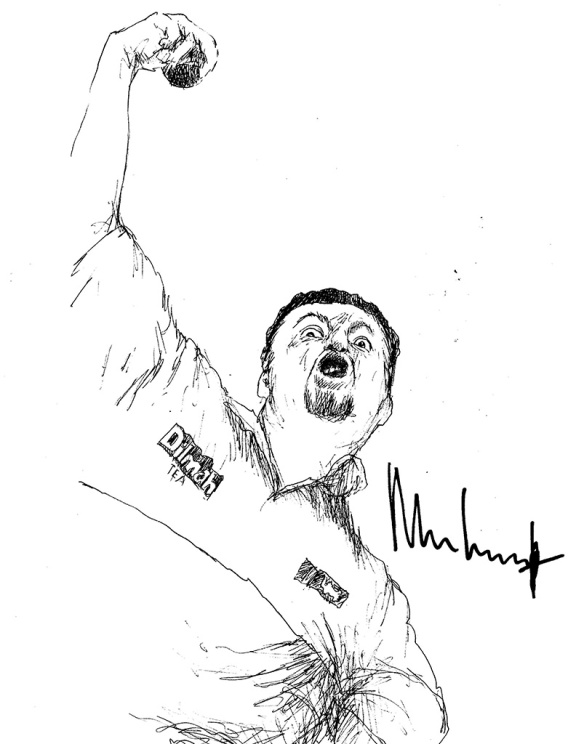