Eddie Redmayne’s star is certainly on the rise. Apart from his obvious talent, he is one of the nicest people in the film and theatre world and always has time to stop and chat and sign some ‘graphs. He has appeared at London’s Donmar Warehouse twice over the last few years – in John Logan’s RED and Shakespeare’s RICHARD II. In the former he played Ken, the fictional assistant of the American abstract expressionist painter Mark Rothko (Alfred Molina). After its London run it transferred to Broadway’s John Golden Theatre for a 15 week engagement till June 2010. For his role Eddie won both the Olivier and the Tony Award. Playing the title role in RICHARD II also garnered him a gong, this time the London Critics’ Circle Theatre Award for Best Shakespearian Performance in 2012. Eddie recently appeared as Marius Pontmercy in Tom Hooper’s musical film LES MISÉRABLES and when he’s not on stage or on the screen, he models for Burberry… and signs my sketches! 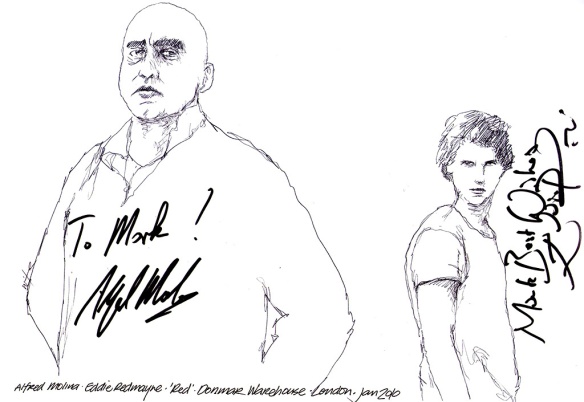