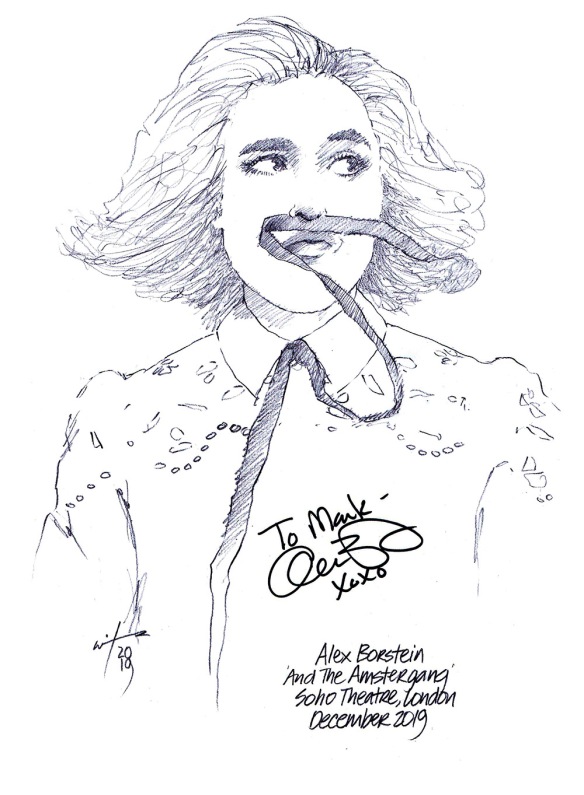 I was very happy to catch up with the delightful Alex – short for Alexandrea – Borstein when she popped into London in mid-December last year to do three nights at the Soho Theatre with her musical comedy show ALEX BORSTEIN AND THE AMSTERGANG. Described as a “little music, little comedy and a lot of dirty words” the show included original songs and hilarious versions of some of the classics.

I first encountered Alex with her recurring characters in GILMORE GIRLS, as Doris, harpist Drella and resident stylist and keeper of many a Hollywood secret Miss Celine. She has been the voice of Lois Griffin and many others in the animated comedy FAMILY GUY since 1999, (including writing and producing) winning an Emmy Award from numerous nominations. She also collected a further two Emmys as the irascible and scrappy rookie, ‘one tough cookie’ manager Susie Myerson in THE MARVELOUS MRS MAISEL and Golden Globe and Screen Actors Guid noms, winning the Critics Choice Award for Best Supporting Actress in a Comedy series this month. The ensemble cast has also collected successive Screen Actors Guild awards for the past two years.

Alex signed my sketch when she arrived at the Soho Theatre on Saturday 14 December.