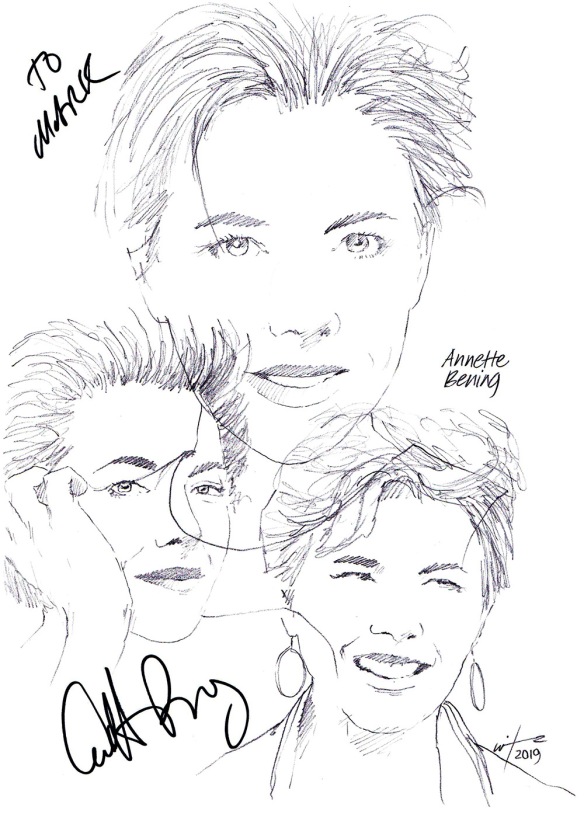 Annette Bening has received four Academy Award nominations. Her first was for her supporting role as Myra Langtry in the new-noir crime drama THE GRIFTERS (1990). She also received a BAFTA nomination. Nine years later, she appeared as Carolyn Burnham in the Best Picture winner, AMERICAN BEAUTY, earning her second nom and first for Best Actress. She did win two SAG awards-one as Best Actress and the other as a member of the cast and collected the Best Actress BAFTA. Her third Oscar nomination was for her portrayal as the popular, but disillusioned theatre actress Julia Lambert in BEING JULIA (2004), winning a Golden Globe. Her last Academy recognition was for the 2010 comedy drama about a same-sex couple raising two teenagers, THE KIDS ARE ALL RIGHT. Once again she won a Globe.

Many Marvel fans will know her as Supreme Intelligence and Mar-vell/Wendy Lawson in the CAPTAIN MARVEL films and was a guest at this years BFI London Film Festival, attending the Gala screening of her latest movie about the CIA’s post 9/11 detention and interrogation Programme, THE REPORT, in which she plays Senator Dianne Feinstein.

Annette has also been nominated for an Emmy for her portrayal of Jean Harris in the 2005 TV movie MRS HARRIS. She began her acting career on the stage and earlier this year returned to Broadway after a 32 year absence as Kate Keller in Arthur Miller’s ALL MY SONS, receiving a Tony Award nomination, to go with the her first in 1987, as photographer Holly Dancer in COASTAL DISTURBANCES.
Annette kindly signed my portrait montage I sent to the American Airlines Theatre in New York, during the ALL MY SONS run in May this year.