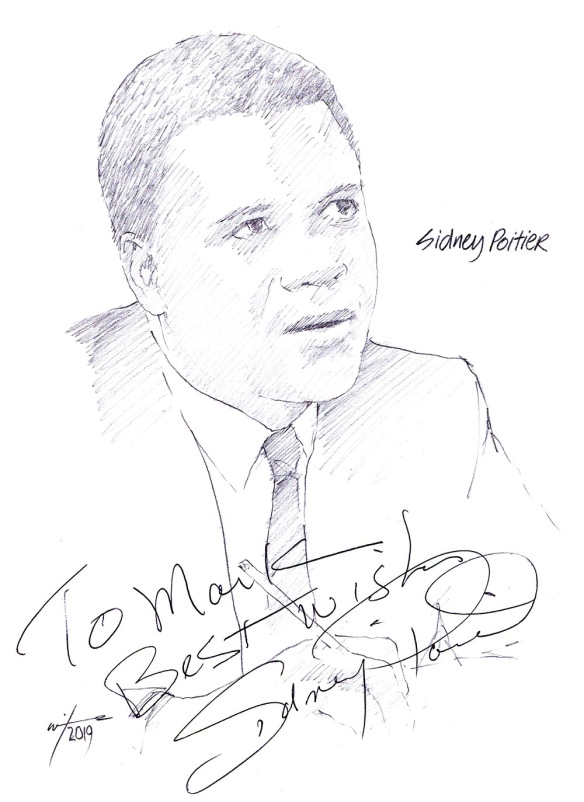 I was super pleased to receive this back in the mail last week. Sidney Poitier, or should I say Sir Sidney is one of my all-time favourite people.

His parents were farmers on Cat Island in the central Bahamas, which was then a British colony. Sidney was born in Miami, Florida, while they were visiting to sell their produce. He was two months premature and not expected to live. But live he certainly did, celebrating his 92nd birthday this year.

In 1964 he became the first African-American to win the Academy Award for Best Actor, for his role as itinerant worker Homer Smith in LILIES OF THE FIELD. He also won a Golden Globe. It was his second Oscar nomination, having received recognition six years earlier for his portrayal of Noah Cullen in THE DEFIANT ONES, for which he won the BAFTA. His groundbreaking work continued in 1967 with three roles, Mark Thackeray in TO SIR, WITH LOVE, Dr. John Wade Prentice in GUESS WHO’S COMING TO DINNER and Detective Virgil Tibbs in my personal favourite, IN THE HEAT OF THE NIGHT, that all dealt with issues of race and race relations.

Both the Academy of Motion Pictures, Arts and Sciences and the British Academy presented him with an Honorary Oscar and a Fellowship respectively. Sidney has also directed nine films, including the box-office hit STIR CRAZY. Sir Sidney was knighted in 1974, and from 1997-2007 he was the Bahamian Ambassador to Japan. In 2009, President Barack Obama presented him with the Presidential Medal of Freedom, the highest US civilian honour.