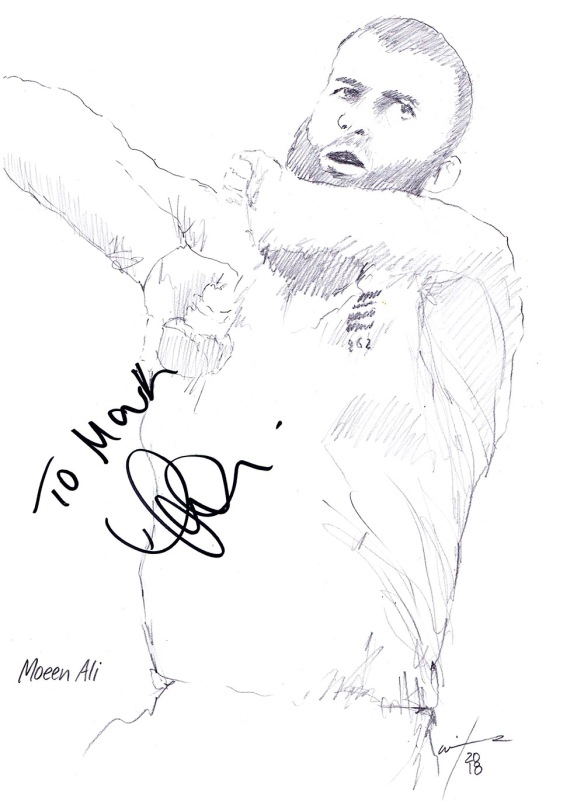 One of cricket’s most popular players is the England all-rounder Moeen Ali. Known fondly as ‘The Beard that’s Feared’, Moeen is a Muslim of Pakistani descent born in Birmingham. He signed for Warwickshire County team in 2004 at the age of 15, making his first class debut the following year.

Moeen bats left-handed and bowls right-arm off-breaks. While he built a reputation as an elegant batsman, it was his off-spin bowling that earned him the call-up to the England side in 2014 after the surprise retirement of Graeme Swan. He made his test debut against Sri Lanka at Lords and scored his maiden test ton in the second test at Headingly, unbeaten on 108 when England went within two balls of saving the series with Jimmy Anderson bowled off the penultimate ball.

Moeen plays in all formats for the National side. Earlier in 2014 he was selected for the ODI series in the West Indies and the World T20 in Bangladesh a few weeks later. He has 5 Test and 3 ODI centuries with a highest score of 155 and 128 respectively and 72 in T20. His best test figures are 6/53 against South Africa at Lords in 2017. Moeen’s charity work includes being an Ambassador for ‘StreetChance’, which holds free weekly cricket coaching clinics for deprived children across the UK.

Moeen signed my sketch after England’s victory over India in the 5th and final test of the series at the Kia Oval in September.