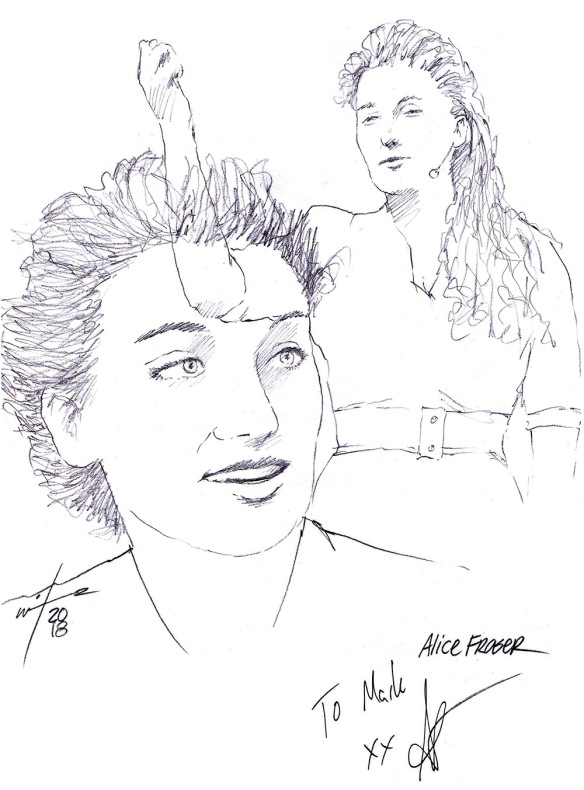 The intro to Alice Fraser’s bio states, “Alice is an award-winning writer, broadcaster, performer and comedian.” It then follows with, “She’s also an ex-academic, ex-corporate lawyer and (sort of) banjo player. “The Australian-born comic, who is now a popular regular on the UK scene, completed a law degree at Sydney University and then a Masters in English Lit at Cambridge, where she also came under the influence of the infamous Footlights theatre club, followed by a stint in New York’s cut-throat comedy scene before landing back in Blighty”. Continuing her bio… “Alice does reliably silly, unpredictably meaningful unorthodox, gut-punch comedy.”

Among the many satirical things Alice does is her semi-regular hosting spot (referred to by one commentator as ‘a frequenter’) on the long-running podcast THE BUGLE with Andy Zaltzman, on which she mentioned she would sign anything given to her. So I left this sketch at The Colonel Fawcett in Camden a few weeks ago where she was part of the Monday evening Good Ship Comedy troupe and true to her word it came back, signed. You can finish reading Alice’s bio and find out where she will be to get stuff signed on www.alicecomedyfraser.com.