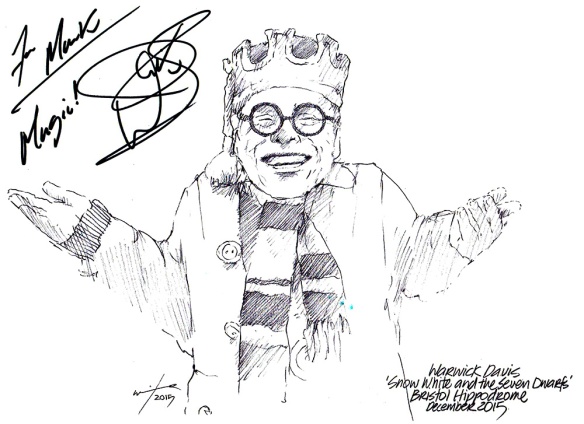 The 3′ 6″ STAR WARS and HARRY POTTER star Warwick Davis appeared as Prof in the Bristol Hippodrome festive season panto production of SNOW WHITE AND THE SEVEN DWARFS in 2015. Warwick came to prominence as the Ewok Wicket in STAR WARS EPISODE VI RETURN OF THE JEDI and continued in THE PHANTOM MENACE, in three roles – Weael, Wald and the walking version of Yoda. In 2015 he returned in the sequel THE FORCE AWAKENS. Warwick was also part of the HARRY POTTER series, as Professor Filius Flitwick and Griphook. On the small screen he played a fictionalised version of himself in the sitcom LIFE’S TOO SHORT, written and directed by Ricky Gervais and Stephen Merchant.

I sent this sketch of Warwick as Prof to the Bristol Hippodrome in December 2015 and it came back last week, signed and dedicated!