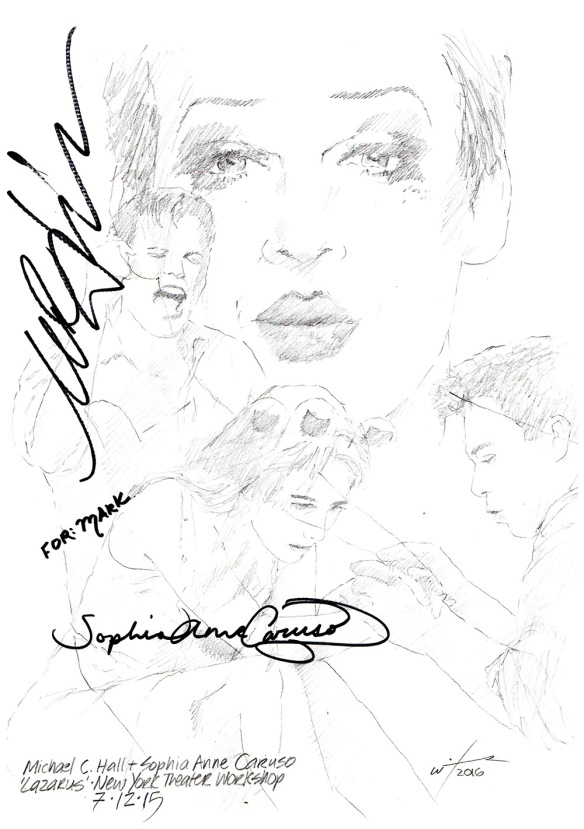 LAZARUS has landed in London. Described as David Bowie’s parting gift to the world, the unconventional musical is a collaboration between the music of ‘Ziggy Stardust’, Irish playwright Enda Walsh and Belgian avant-garde director Ivo van Howe, based on NIcolas Roeg’s 1976 film THE MAN WHO FELL TO EARTH, in which Bowie starred as the humanoid alien Thomas Newton, stranded on earth after being driven out by a drought on his own planet. It premiered at the New York Theatre Workshop at the end of 2015. His final public appearance was at the show’s opening on 7 December 2015  prior to his death a month later. The opening song, ‘Lazarus’ is the third track on his final album ‘Blackstar.’

DEXTER’s Michael C.Hall plays Newton and Sophie Anne Caruso is Girl, his muse. Both have reprised their roles in Bowie’s birthplace, at the pop-up Kings Cross Theatre with a specially constructed cavernous 900 seater venue. It opened last night.

I popped over on Friday night to the uncovered stage door to get this sketch signed in person, but it was raining, an unusual occurrence for London and not ideal for collection graphs. However the very kind stage door staff promised to get it to Michael and Sophia Anne and they did.