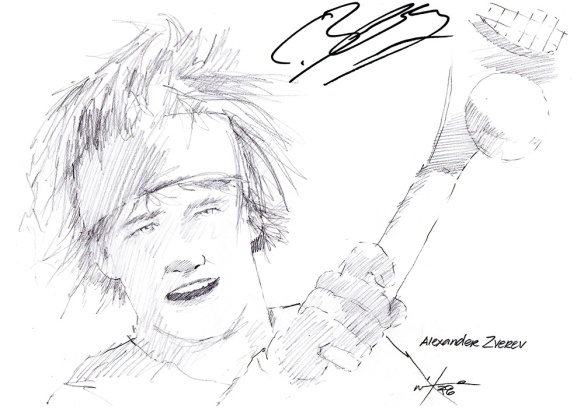 After a stellar junior career, 19 year-old German tennis prodigy Alexander Zverev’s rise up the senior rankings is attracting attention. While growing up he was a huge Roger Federer fan and many are predicting he will emulate his idol. Rafael Nadal said, “He is a clear possible future No.1. He has all the shots.” Tennis is in his blood. His father Alexander Snr was a professional player, representing Russia in the Davis Cup before emigrating to Hamburg, where Alex Jnr, known on the tour as ‘Sascha’ was born. Both his father and mother are now tennis coaches and his brother Mischa is also a professional player.

Alexander won the ATP Star of Tomorrow Award and is the youngest player inside the top 50 with a current ranking of 28. On the ATP website his bio describes his playing style as “punchy ground strokes, a booming serve and sauntering athleticism” The 6′ 6″ Sascha can follow up a 130 mph first serve with a 120mph second. At the pre-Wimbledon Boodles Tennis event in June this year he beat world No.1 Novak Djokovic in straight sets and signed my sketch.