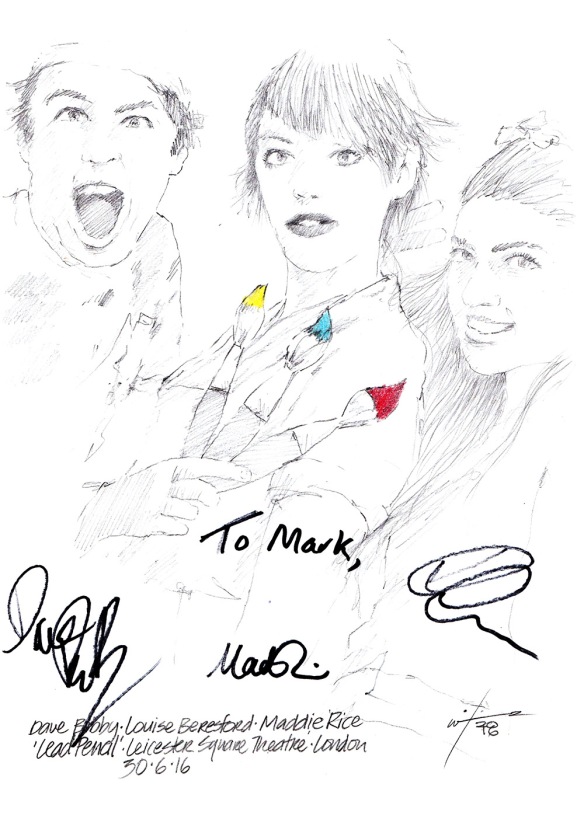 Now this is a group I had to draw. The comedy sketch trio of Louise Beresford, Maddie Rice and Dave Bibby, collectively known as LEAD PENCIL and specialising in nonsense. As their blurb says, “a comedy sketch show that is literally sketched.”

Realising that life is absurd the group formed in 2012 to deconstruct it with a show that is based on 90’s nostalgia, full of observational sketches, songs and their trademark 2D stylised, colourful cardboard props. Sell-out shows (some may say they were drawing in the crowds, but that would be silly) at the Underbelly in Edinburgh followed and appearances on Comedy Central and BBC Radio 4.

I just had to give them my 4B treatment with a splash of colour. The rendering was dropped into the Leicester Square Theatre at the end of June where they were performing for one night only. It was returned via an unusual route. Nothing came back for a couple of weeks, so I thought they maybe they didn’t get it, didn’t like or simply run out of writing instruments.

Then I received a letter from Transport for London’s Lost Property office saying they may have an item of mine.  As it transpired it was this drawing, signed by Louise, Maddie and Dave with a complimentary note and the stamped envelope I had left with the drawing. It appears that one of them was intending to post it and left it on a bus. Thanks LEAD PENCIL and TfL Lost Property.