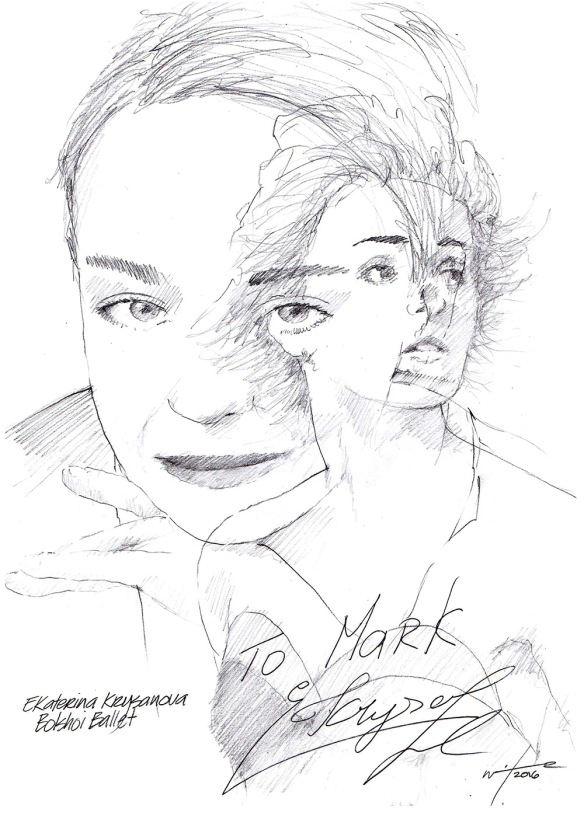 I drew an initial sketch of Russian ballet star Ekaterina Krysanova and dropped it into the Royal Opera House in London for her to sign during the Bolshoi Ballet’s three-week Diamond Anniversary residency at Covent Garden recently.  ‘Bolshoi’ literally means ‘big’ and she’s one of their biggest names. I immediately received a very nice complimentary note back, but, alas no signed sketch. This has happened on a few occasions when people inadvertently forget to include the sketch. I redrew this one and popped it back to the Opera House. This time my second letter contained the prize. I did say she could keep the initial drawing.

After graduating from the Bolshoi Ballet Academy in 2003, the Moscow native joined the famous company rising to Lead Soloist in 2009, before becoming a Principal.

Among her many medals is the Gold at the 2001 at the Prix de Luxemborg International Ballet Competition.

She was the only Principal to appear in all five productions  DON QUIXOTE, SWAN LAKE, TAMING OF THE SHREW, THE FLAMES OF PARIS and LE CORSAIRE this year, so I was super appreciative she took the time out of a hectic schedule to accommodate my requests.