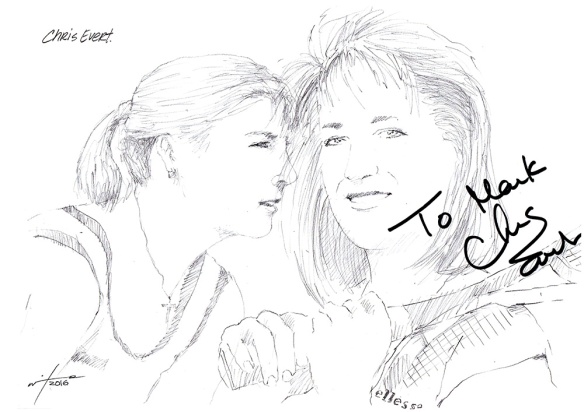 One of the greatest tennis players of all time, American Chris Evert dominated the women’s game in the 1970’s and early 80’s. She was the first World Number 1 when the official WTA computer ranking system was instituted in 1975 and held that position year-end until 1981, winning 137 singles and 32 doubles titles in a professional career that spanned 17 years until her retirement in 1989. Her total of 260 weeks is third behind Steffi Graf and Martina Navratilova. She was successful on all surfaces, especially clay, winning the French Open on seven occasions. Her 18 Grand Slam singles titles also include two Australian, three Wimbledon and six US Open victories. Chris’ winning percentage of 89.96 is the highest in the history of the Open era, men’s and women’s and on clay her 94.55% is a WTA record. She also won four World Tour Finals.

I meet Chris at this year’s Wimbledon Championships, where she has been an analyst for ESPN since 2011 and signed my sketch.