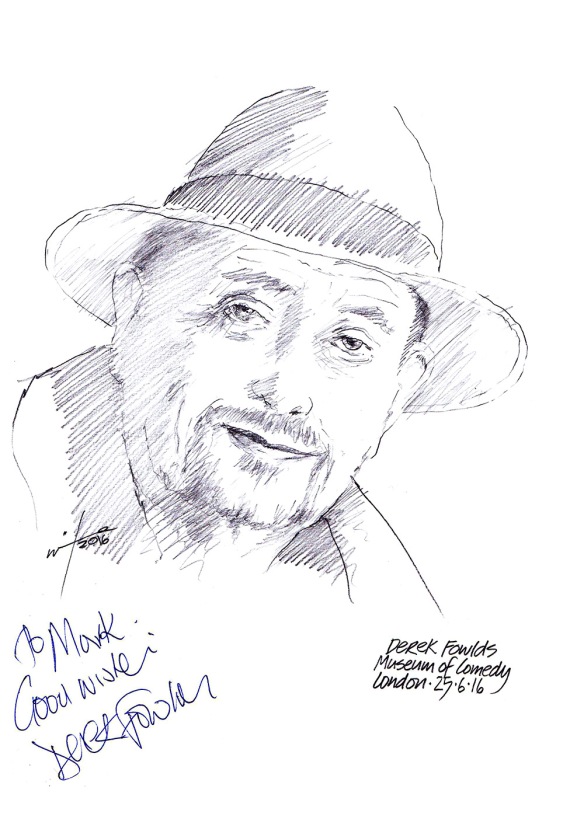 British actor Derek Fowlds has graced our television screens for over half a century. During his National Service stint in Malta, he was a member the RAF theatre group and followed one of his sergeants to RADA, where he trained as a professional actor. After a number of West End plays including THE MIRACLE WORKER, Derek landed his first TV role, replacing Rodney Bewes as the presenter in THE BASIL BRUSH SHOW.

Upstaged  by a stuffed fox, ‘Mr Derek’ intended to stay for one series, but remained for eight, charmed by the Basil character. This was followed by the first of his famed small screen alter egos, Bernard Woolley, the pedantic private secretary in the massively popular series YES MINISTER and YES PRIME MINISTER alongside Paul Eddington and Nigel Hawthorne. In 1992 he created his longest running role, the pig-headed and cranky former copper-turned local public Oscar Blaketon in the  police nostalgia drama HEATBEAT. In an interview Derek said he always wanted to play Oscar as a transvestite, but the producers of the family show didn’t think that was appropriate. “He had a theatrical mother, hence the name Oscar. I always thought he would become Olivia in the weekends.”

Late last year the 79 year-old Derek published his autobiography ‘A Part Worth Playing’ and as part of it’s promotion he appeared at the Museum of Comedy last month in an evening entitled ‘Yes Prime Minister and Me’ in conversation with journalist Sam Westerby about his long career.  Derek’s six-year old grandson Marlon said to him,
“When I’m a man, you’ll be dead, won’t you?” Derek laughed, “Well, it’s possible, but you’ll have a book to read about me.”

Unfortunately I couldn’t make it to the event, but I drew this sketch of Derek and called past the Museum of Comedy earlier on the day to leave it there for him to hopefully sign.
The Museum of Comedy is situated in the basement vault, known as the ‘undercroft’ of St George’s Church in London’s Bloomsbury. It was not open at the time I arrived, so I slipped my envelope under the door and hoped for the best and some divine intervention. It worked. Derek not only signed and dedicated my rendering, he also sent me an appreciative note.