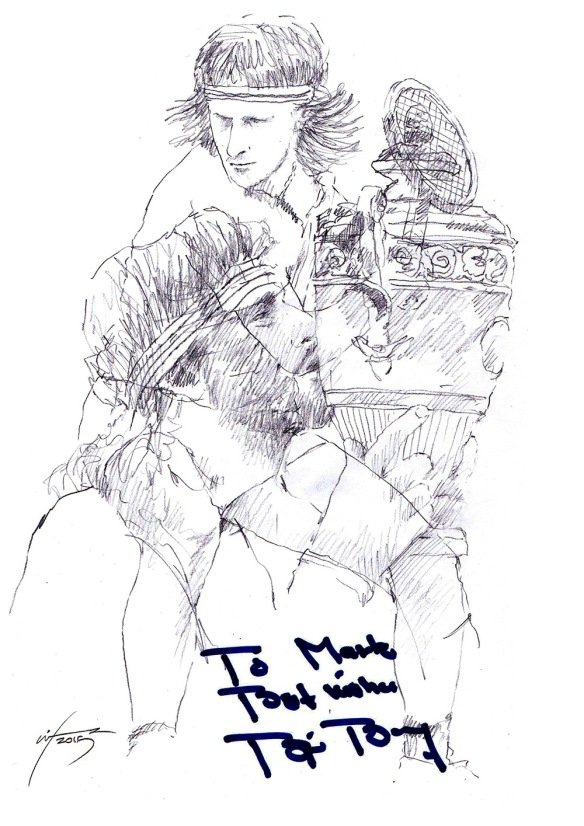 With the French Open at Roland Garros just completed and Wimbledon later this month it’s an appropriate time to pay homage to one of the true icons of tennis, Sweden’s Bjorn Borg, considered by many to be one of the greatest players in the history of the game. The first male player to win eleven Grand Slam titles, Bjorn held the number one spot for a total of 109 weeks between 1974–81, winning six French titles and five consecutive Wimbledon crowns.

His distinctive playing style with powerful ground strokes on both forehand and his highly unorthodox double handed backhand and his unique appearance was one of the reasons for the sports rise in popularity in the 1970’s. Because of his calm demeanour on court he was nick-named ‘Ice- Borg’.

Winning the French and Wimbledon titles in the same year is considered the toughest to achieve and almost impossible in the modern era. Only Bjorn, Rod Laver, Rafa Nadal and Roger Federer have achieved the ‘Channel Slam’ but the cool Swede is the only player to have done it three times.

He also holds the record for the winning the most consecutive sets – 41– at The French Open and in 1978 and 1980 won the title without dropping a set, an achievement he repeated when winning his first Wimbledon in 1976.

He is one of the reasons why I started following tennis and I just missed meeting him at last year’s Wimbledon. I was waiting in the ticket line and he was waiting for his car on the other side By the time I got in and made my way to the Members entrance he had gone, so I sent my sketch to him at his company in Stockholm and it was returned with interest, as they say in tennis circles,msigned and dedicated. Very cool. I just found out it’s Bjorn’s 60th birthday today… even cooler!