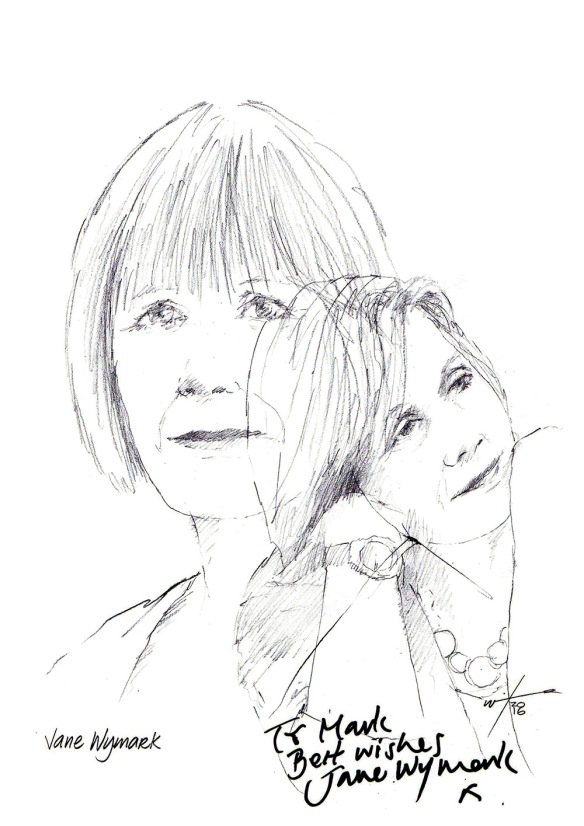 Prior to that Jane became a household name in the period drama POLDARK during the 1970’s.

There was no escaping the acting profession. Her English father was the Royal Shakespeare Company actor Patrick Wymark and  Olwen, her American mother was a playwright. “I know acting was a stupid profession to go into, but when you hang around theatres all your life, it imprints,” she told the Birmingham Mail.

She stared playing Joyce in 1997. “There’s a heavy burden being the nicest person on the telly. I am fond of Joyce, but she’s very limiting.” When she finished the role after John retired in 2010, she was quoted as saying ,”it would be nice to have some completely evil roles and play a really bad person with no redeeming features.”

Jane is currently appearing in the West End at the Arts Theatre in a series of ‘playets’ by five of Britain’s leading writers, collectively titled A VIEW FROM ISLINGTON NORTH. It’s not exactly evil unless you feel political satire is villainous. Jane may have finished playing the nicest person on TV, but that hasn’t ended in real life. I meet her at the front door (which is also the stage door) before the first matinee and was just like Joyce. I told her how much I liked MIDSOMERS, as did everyone else in the ‘bunch of Barnabyites’ gathered. She actually took my sketch into one of the tables in the cafe area of the theatre so she could sign without ruining it, telling me that she had contacted Laura (Howard, who played he screen daughter Cully) and reminded herself to get in touch with John to come and see the play. A MIDSOMERS reunion, how ideal.