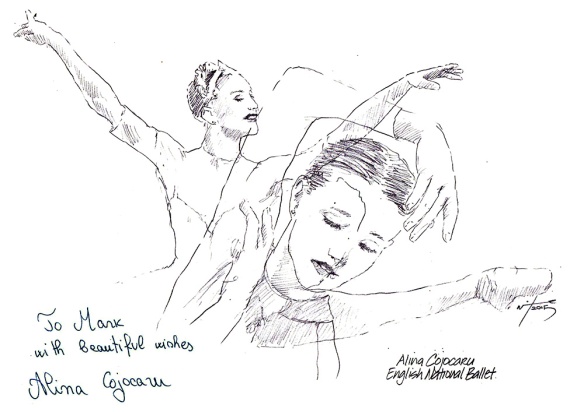 At the age of fifteen, Romanian ballerina Alina Cojocaru won a scholarship at the prestigious Prix de Lausanne ballet competition to train at the Royal Ballet in London. She decided to become a Principal at the Kiev Ballet instead, but  in 1999 she returned to the Covent Garden, becoming a soloist a year later then Principal in 2001. Her partnership with Dane Johan Kobborg is considered to be one of the greatest in the history of ballet. In 2012 she became the only ballerina to receive the Prix Benoisnde la Danse twice after her performance in John Neumeier’s LILI at the Hamburg Ballet.

The New York Times wrote “Alina Cojocaru’s line, her beautiful extension and airy jumps, her wraithlike weightless quality are all gorgeous. This is technique rendered invisible by artistry.”

In 2013 she left the Royal Ballet and became a Principle at the English National Ballet.

Alina signed this sketch I sent to her at the ENB and returned it along with a card thanking me for my letter and the drawing.