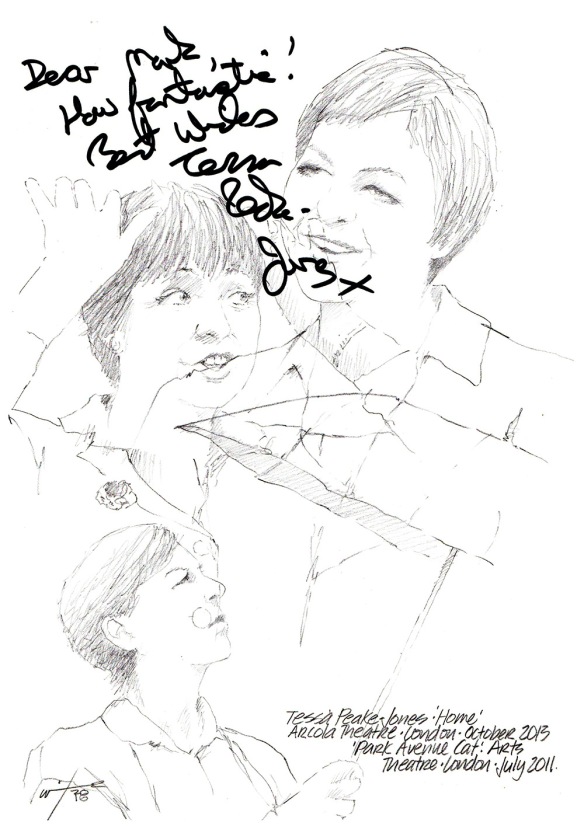 If you think that Tessa Peake-Jones’ face is familiar, that’s because the popular English actress has appeared in every major TV show over the past twenty years, including
DR WHO, CASULTY, MIDSOMER MURDERS, THE BILL, HOLBY CITY, POPPY SHAKESPEARE and HEATBEAT. However, her most notable role was the bubbly Rachel Turner, Del Boy’s longtime ‘significant other’ in ONLY FOOLS AND HORSES from 1988 until it ended in 2003. At it’s peak the iconic sitcom attracted 24 million viewers. She is currently on the small screen as the crotchety housekeeper with a heart of gold, Mrs Maguire in ITV’s GRANTCHESTER.

Tessa’s equally impressive stage career has seen her in a variety of plays in London and beyond. She has just finished playing Julie who operates an ice-cream van near Beachy Head in the World Premiere of Tabitha Mortibiy’s BEACONS at the Park Theatre in North London. She described it as a “It’s a sweet story about loneliness”.

I drew this sketch of Tessa from two London productions, HOME at the Arcola Theatre in 2013 and PARK AVENUE CAT at the Arts Theatre in 2011, which she signed with a lovely dedication for me during her run at the Park.