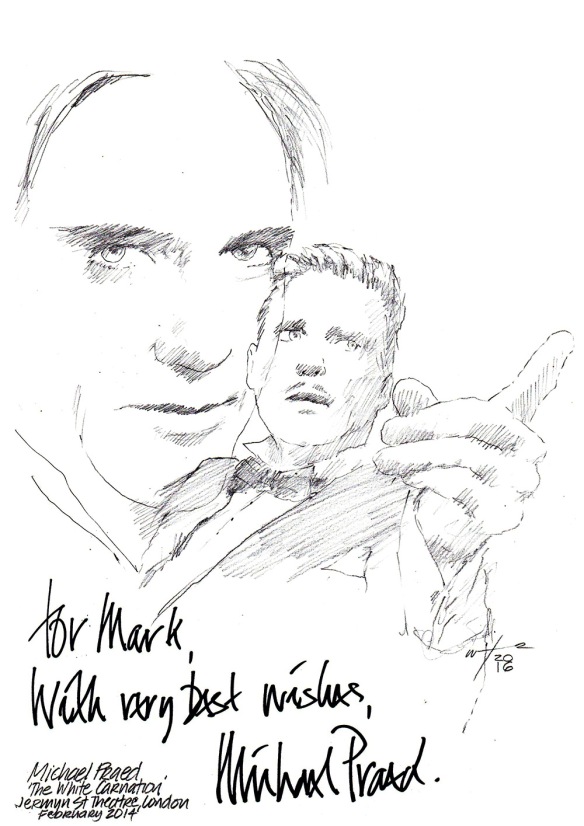 I first saw Michael Praed on stage at the Comedy Theatre in 1994 in Daphne du Mauriers’s SEPTEMBER TIDE. He starred opposite the late Susannah York in a production that still rates as one of my favourites. I mentioned this to Michael last night  in the dimly-lit stage door area of London’s Dominion Theatre where he is in previews  for Jeff Wayne’s musical version of THE WAR OF THE WORLDS.

TV viewers will be familiar with Michael as, in the words of Telegraph critic Tim Walker, ‘the once smouldering star’ of the Eighties hits series’ ROBIN OF SHERWOOD and DYNASTY.  He has forged a versatile stage career in both musicals and plays.

In 2014 he appeared in the first revival since it’s 1953 premiere of R.C. Sherriff’s  supernatural drama THE WHITE CARNATION at London’s Jermyn St Theatre, after a sell-out run at the Finborough Theatre. Walker described his portrayal of John Greenwood, a man everyone thought was dead but suddenly comes back to life,  as marking “Michael Praed’s transition from sex symbol to serious stage actor.” Fellow scribe, Dominic Cavendish wrote, “What a neglected little treasure it prove; not life-changing maybe, but life-affecting.”

I drew this sketch of Michael in the ‘ghost’ role and that was the reason I was lurking with a sharpie in the dimly-lit Dominion Theatre stage door area. I didn’t see him leaving after the matinee and he had  actually gone past me, but turned to enquire if I wanted something signed. How polite. I must have had ‘that’ look, one that I have been cultivating over many years.  Probably helps holding a drawing and a pen. Big clue. Michael has one of the most beautiful sigs, with crafted and distinctive handwriting, as you can see, it’s a piece of artwork itself.  I did do another drawing ages ago of him in SEPTEMBER TIDE which I might find and pay another visit to the dimly-lit Dominion Theatre stage door.