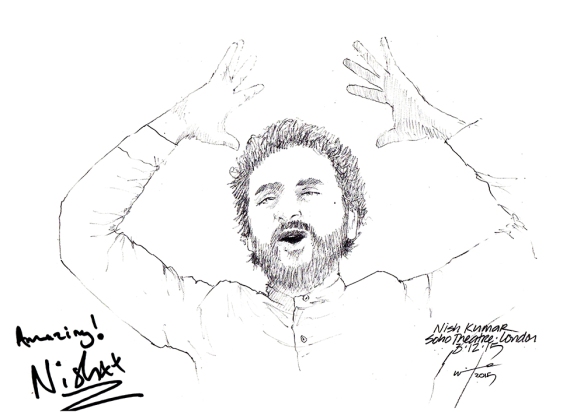 Nish Kumar is one of the funniest guys around. Even the Guardian… I think it was the Guardian, said he has sealed his place at the top table of UK comedy. His show LONG WORD …LONG WORD… BLAH BLAH BLAH … I’M SO CLEVER (yes that is the actual title) was the hottest ticket at this year’s Edinburgh Fringe and was nominated for the Best Show Award.

This month he’s taken up residency at London’s Soho Theatre. The publicity blurb describes the performance as “This is a stand-up comedy show for people who like stand-up comedy by a man that does stand-up comedy.” Succinct. It goes on to say the “depending on your opinion, the man is either ‘a comedian on the up (The Times), ‘a comedian I’ve never heard of’ (Audience Member) or ‘a very clever boy’ (Nish Kumar).

After last night’s show he was perched in the packed bar signing copies of his DVD and I was perched anywhere near him but was slowly wading through the throng and held my sharpie up indicating I was heading his way. When I showed him the sketch he probably thought ‘missed sale’ but politely said, “You’ve made me too handsome”. I apologised and he signed it.

So (Ho Ho Ho) if you’re in need of some festive cheer, pop along and catch Nish… oh and buy his DVD. Say Mark sent you.