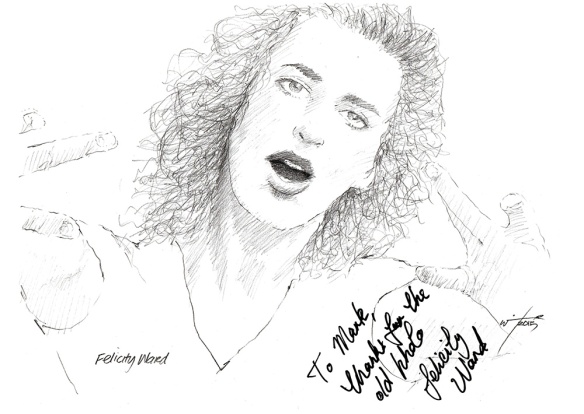 And now for a bit of toilet humour. It’s September. All the comedians who took the Edinburgh Fringe hiatus last month are back on the London comedy circuit, including Australian comic Felicity Ward. Leading up to the Festival, everyone was performing work- in-progress gigs in preparation for it, including Australian comic Felicity Ward. I did a quick, ‘young’ sketch of her, based on an old pic but missed getting it signed at the Leicester Square Theatre in the frantic funny foreplay that sums up July. It stayed in my folder for some reason…which became apparent on Saturday evening. Heading home from a successful stalking session, one is apt to have to ‘spend a penny’ or in Central London it’s usually 30p(ee) at the Charing Cross Station lavatory. To avoid such extravagent expenditure, one can detour via certain accessible, user-friendly establishments and go for free. One such haven is The Comedy Pub. Lo and behold, who should have just finished headlining a show on such esteemed premises but the Australian comic, Felicity Ward. By way of a back-story, her Edinburgh run was called What If There’s No Toilet? because she used to perform her sharp, upbeat, self-mocking routine while simultaneously suffering from panic attacks and needed to go to the ‘dunny’ -to use a colloquial Aussie term and it rhymes with funny-four times an hour.”Anxiety can be cruel, but very,very funny.” she said.’IBS is the sexiest of all syndromes” and her show is about irritable bowel syndrome and the search for the nearest toilet. So there you have it. Anyway back to the story. My ablutions sorted I approached a security person and asked if the Australian comic Felicity Ward was still in the house. She was and he asked me if I was a friend. I pulled out the ‘young from an old photo’ drawing, ‘cos that’s what friends do. He recognised the likeness and took me to her ‘Wow…thanks I look so young…thank you for using an old photo.’ I didn’t see much difference, but I said it was the least I could do for a fellow antipodean. Relief all-round really.