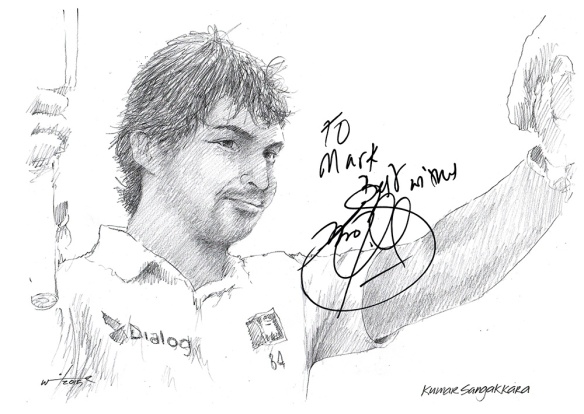 The current world number one batsman in test cricket is Sri Lankan Kumar Sangakkara, who has just retired from the international arena but has taken up a two year contract with English county Surrey, though some media reports suggest he may be reconsidering his retirement.

He is widely regarded as one of the best batsmen of all time with a Test average of 58.66 and an ODI average of 42. A left-handed top order batsman, he has bowled a few right arm off breaks and is an accomplished wicket-keeper, having the largest number of dismissals in ODI cricket with 449 and the highest number of stumpings, 99 in ODIs.

Kumar’s 11 double centuries in tests is second only to the great Sir Don Bradman (12) and along with fellow Sri Lankan Mahela Jayawardene shares the highest partnership for any wicket – 624 against South Africa in 2006. Kumar scored 287 and Mahela 374.

I not only got to see him play in the opening game of the County cricket season at the Kia Oval last Sunday against Essex, thanks to my friend Dan’s membership and generosity, but also got to meet him after the end of day’s play.

The world’s best batsman was very affable and chatted away awhile happily signing my sketch and a photo for me.