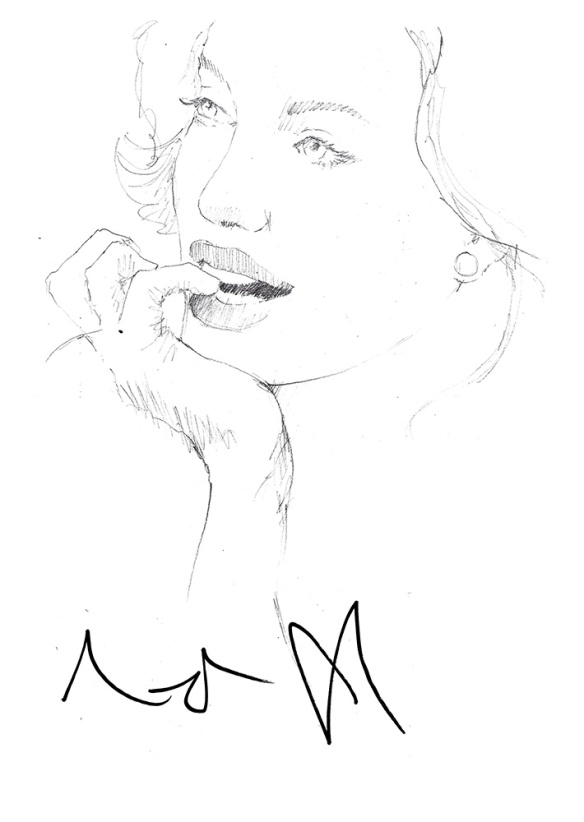 I first met a relatively unknown Angelina Jolie at a FoxSearchlight function in early 2000, during the annual ShoWest Convention in Las Vegas. She was promoting her latest film, GIRL, INTERRUPTED which had just been released in December 1999. As it turned out it was to be her breakthrough year, winning the Oscar for Best Supporting Actress for her role as the sociopath mental patient Lisa Rowe in the film. Critic Roger Ebert said of her performance, “Jolie is emerging as one of the great wild spirits of current movies, a loose cannon who somehow has deadly aim.”

Since then she has had more hits than misses. Angelina recently announced she would be spending more time behind the camera in future, concentrating on a fledgling directing career. Her latest offering is the WW2 epic UNBROKEN, which had its UK Premiere at the Odeon in London’s Leicester Square last night (25.11.14). I’ve sketched Angelina a few times and like many other drawings, have carried them around in the ever increasing folder ‘just in case’. She is an excellent signer and there have been numerous opportunities to get them graphed, but somehow it never happened. This particular rendering looks unfinished, but I liked the minimal lines-just enough to ‘capture’ her without having to overdraw to create a representation. In spite of the inclement November weather and a very tight timetable, Angelina, as usual, did ‘the line’, signing as many as possible, including my portrait with the few lines, before disappearing into the cinema for the screening.