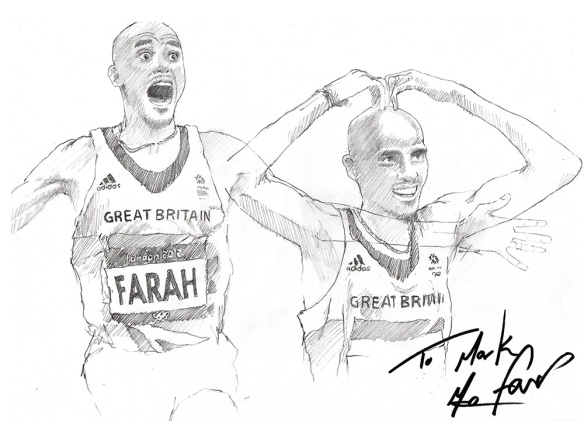 Athletics star Mohamed “Mo” Farah is targeting a third triple gold at next month’s Commonwealth Games in Glasgow. The double World and Olympic Champion will make middle distance running history if he wins the 5,000 and 10,000 metre events.

‘The Mobot’, his signature victory celebration, was suggested by TV presenter Clare Balding on James Corden‘s A League of Their Own. It represents the ‘M’ in Mo inspired by the Village People’s YMCA. Virgin Media then promised to donate £2 to the Mo Farah Foundation for every YouTube video uploaded with someone doing The Mobot.

I missed getting Mo to sign my sketch as he passed through Greenwich. Mind you, at the time he was running his first London Marathon, not the most appropriate time to ask for a ‘graph. He was mobbed at the BAFTA TV Awards at Covent Garden, so I missed him there too. I sent it to his London agent and third time lucky…. here it is! Go Mo for the triple!