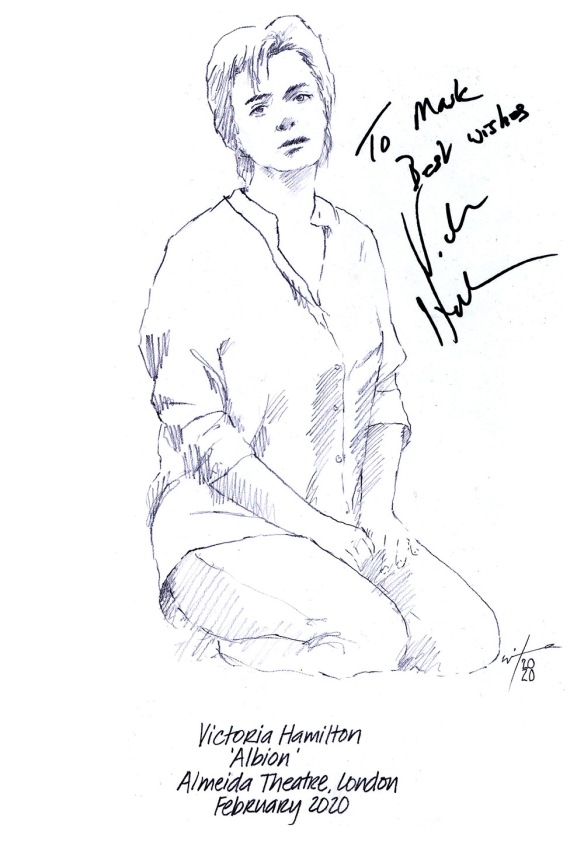 Victoria Hamilton returned to the Almeida Theatre stage as the formidable matriarch Audrey in the revival of Mike Bartlett’s state-of-the-nation play ALBION last month. Directed by Rupert Gould, it premiered in October 2017. Audrey is a mover and shaker in her mid-50’s who sells up in London to live in a seven-bedroom crumbling estate she knew as a child. She plans to restore it to its former glory, including designing the garden as a memorial to her dead son who lost his life in war and his fellow veterans.

“Victoria Hamilton is on breathtaking form as a grieving mother in richly layered play inspired by Chekhov’s THE CHERRY ORCHARD.” wrote the Guardian’s Michael Billington in his original review.

Victoria has been nominated for two Olivier Awards, the first for her portrayal of Sheila in A DAY IN THE DEATH OF JOE EGG opposite Clive Owen and Eddie Izzard. The production transferred to Broadway, where Victoria was also nominated for a Tony. Her second Oliver nom was for her 2004 role as Catharine in Tennessee William’s SUDDENLY LAST SUMMER at the Lyceum Theatre in London. She won the London Critics’ Circle Theatre and Evening Standard Awards.

TV viewers will be familiar with Victoria as the younger Queen Victoria in the historical drama series, VICTORIA & ALBERT (2001) and as the Queen Mother in Netflix’s THE CROWN, which earned the cast successive Screen Actors Guild Award nominations in 2017 and 2018. She also plays Anna in DOCTOR FOSTER and this year’s COBRA, as the British Prime Minister’s Head of Staff, Anna Maxwell.

Victoria signed my sketch of her as Audrey at the Almeida Theatre on the show’s final day at the end of February.