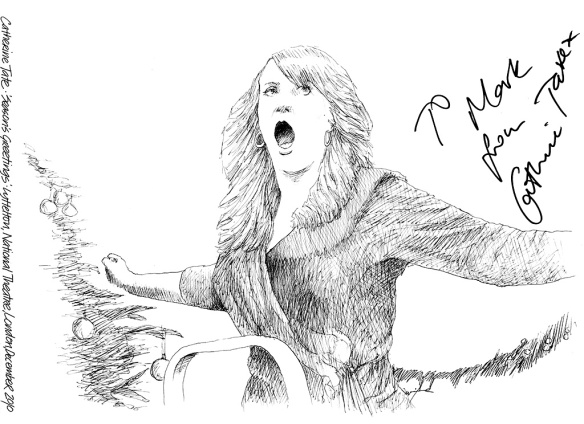 Comedian and writer Catherine Tate appeared in Season’s Greetings at the National Theatre at the end of 2010 and early 2011.

It’s the Alan and Ayckbourn’s 1980 black comedy about a dysfunctional family Christmas. Tate’s character is always flapping about the house and constantly decorating the Christmas Tree.

I remember one time filming Catherine signing at the National Theatre stage door and she said I should have asked her permission, which was a first. However, I apologised but said it was good to see talent taking the time to sign for fans. It was all very convivial, but I decided to leave my Season’s Greeting’s sketch for her to sign and post back, instead of another in-person encounter. That was December 2010. I received it the following October! But better Tate than never.