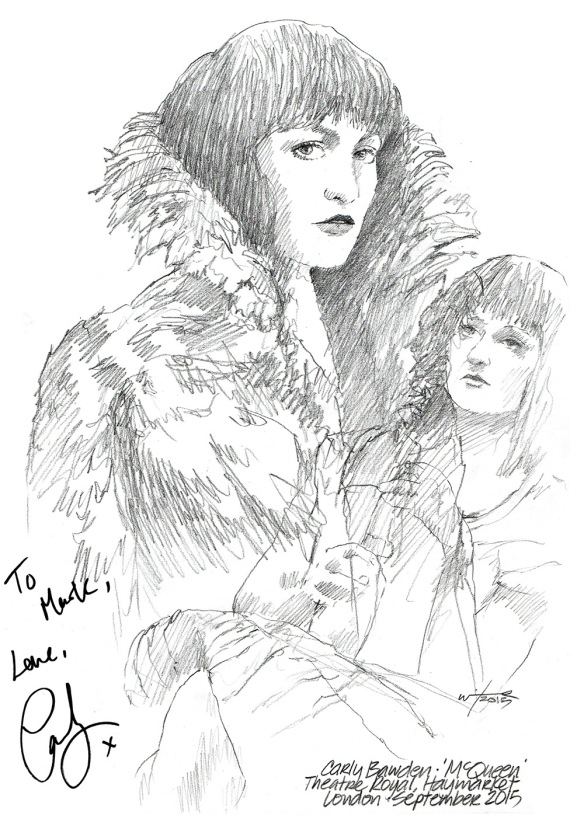 Carly Bawden is starring as Dahlia in the West End transfer of McQueen at the Theatre Royal Haymarket, replacing Dianna Agron who played the role during the plays sell-out premiere season at the St James Theatre earlier this year. Written by James Phillips and directed by John Caird, It is a revelationary insight into the imagination of Lee “Alexander’ McQueen, one of British fashion’s most notorious and brilliant artists. Dahlia is based on a 2008 quote by the late designer. “I’ve got a 600 year-old elm tree in my garden. I made up a story: a girl lives in it and comes out of the darkness to meet a prince and becomes a queen.” In the play Lee discovers Dahlia, a strange and beautiful girl lurking in his house. She has been watching him from a tree for the past 11 nights. Instead of calling the police, he takes her on a wild one-night tour of London, believing she might know him better than he knows himself. Dahlia is his other self.

I drew this sketch of Carly as Dahlia wearing the centrepiece’golden feather coat’. It’s my favourite because of what it represents she said in a recent interview. ‘It’s quite a striking piece.He (McQueen) was always attracted to misogyny and things like that when all he really wanted to do was protect women…he said his clothes were like armour.The golden coat provides this striking, beautiful armour.”

Carly played Squeaky Fromme opposite Catherine Tate in Jamie Lloyd’s revival of Assassins at The Menier Chocolate Factory last year. I met her on the final night and she signed a Squeaky sketch for me. When we caught up again, at the Haymarket stage door after Saturday’s matinee, I asked her to graph this Dahlia drawing, said gasped, ‘Oh It’s YOU!”…but in a ‘nice way’-not a ‘you’re something on my shoe’ sorta way and was once again very complimentary about the rendering.