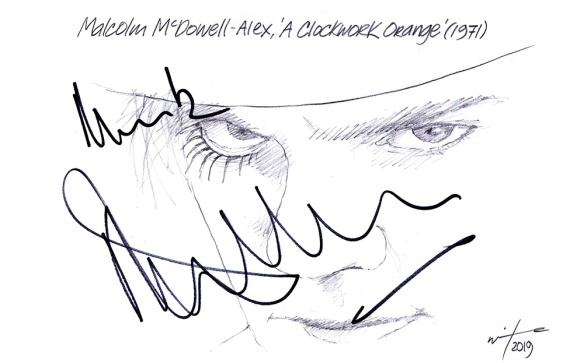 When Stanley Kubrick’s dystopian crime film A CLOCKWORK ORANGE was first released in NewZealand nearly fifty years ago, the Censor gave it an R20 classification, resulting in public protests, which subsequently resulted in a lower rating a few years later. As a high school student at the time, it was considered the ultimate bragging right, amongst pubescent teenage boys to be able to successfully enter the cinema, acquire a ticket, (usually via an older sibling) stay for the duration without underage detection and emerge triumphant at its conclusion. I did not claim such bragging rights, instead enjoying the ritual vicariously through the few that achieved such status.

Based on Anthony Burgess’s 1962 novel of the same name, its central theme is behaviourism, specifically youth subcultures and juvenile delinquency, which was on the rise in Britain during the early sixties. It questions the definition of ‘goodness’ and the use of aversion therapy to stop immoral behaviour.

The story is set in ‘near-future’ London. The central character is Alex played by Malcolm McDowell, who leads his band of ‘droogs’. They hang out at Korova milk bar, embarking on ‘a little ultraviolence’ while warbling ‘Singin’ in the Rain.’ After he is jailed and subjected to behaviour modification therapy, Alex is released back into society, only to become prey at the hands of his former victims. Considered a cult classic now, the 1971 film went on to collect four Oscar and seven BAFTA nominations, including Best Picture and Best Director. Malcolm was nominated in the Best Actor categories at the Golden Globe, National Society of Film Critics and the New York Film Critics Awards.

As part of the Stanley Kubrick Season at the British Film Institute for the past two months, Malcolm McDowell made a guest appearance, participating in a Q&A after the initial screening of A CLOCKWORK ORANGE, where he signed for me.