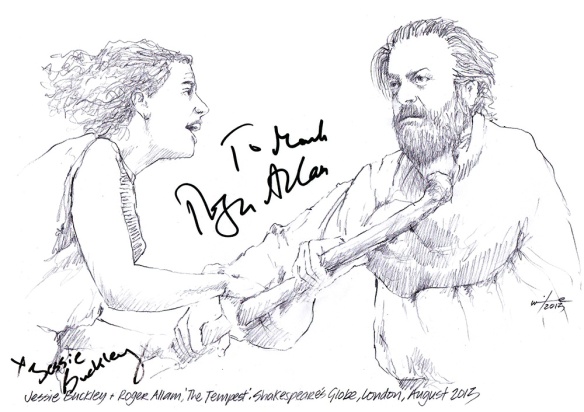 I drew this sketch of Roger Allam as Prospero and Jessie Buckley as Miranda from Jeremy Herrin’s production of THE TEMPEST which was part of the 2013 season at Shakespeare’s Globe in London. But I never got the chance to get it signed at the time. It’s what I call ‘siguations vacant’.I have numerous  unsigned sketches in my bag, just in case I cross paths with those rendered. Jessie actually signed a short while after the season finished at her London agency, but I’ve been waiting for Roger to walk the boards again. This seems to happen at three to four year intervals, between his screen commitments. Having won the Olivier for his magnificent performance as Falstaff in HENRY IV PARTS 1 & 2 at the Globe in 2010, he returned for THE TEMPEST three years later. He did so again, albeit it a little longer, last month in LIMEHOUSE at the Donmar Warehouse, where I managed to meet up with him on a quiet Saturday morning to complete the sketch signing.