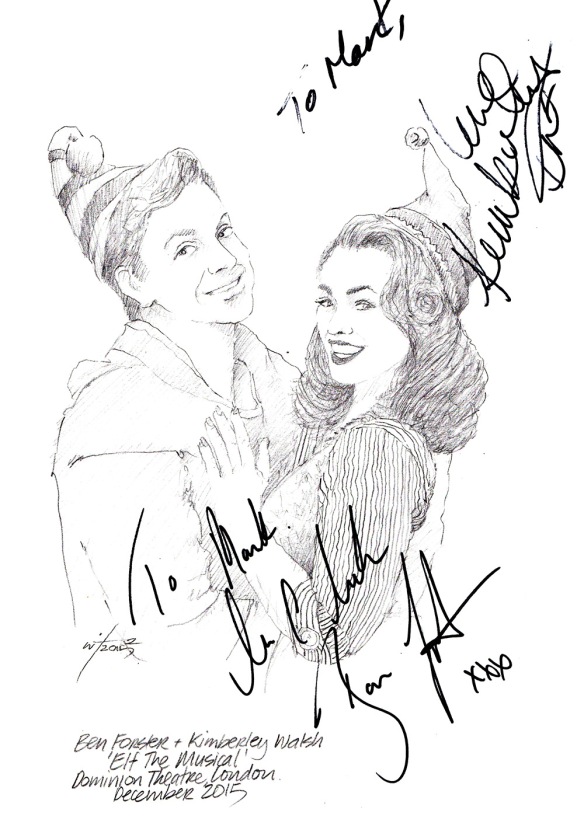 A sense of deja vu prevailled as I waited for Ben Forster to emerge from the Dominion Theatre’s stage door after a matinee performance as Buddy in ELF THE MUSICAL. Based on the popular 2003 film. The production premiered on Broadway during the festive season of 2010-11 before it’s 2014 UK debut in Plymouth with Ben in the lead role, reprising it for the west end transfer.

One of theatre’s genuinely nice guys, Ben has been the subject of a number of my sketches. Last year I was standing in the same spot for him to emerge from another matinee, this time playing Magaldi in EVITA. The usual band of admirers were waiting, probably the same people on both occasions. After the ritual selfies with them, or in this case ‘elfie’ (sorry) Ben signed the drawing with his usual kind compliments. I asked him what he was doing next and he said “Phantom.” “The masked man himself?” I quipped  and he confirmed he will  take on the title role across town at Her Majesty’s from early February.

Playing opposite Ben as Jovie was pop star Kimberley Walsh from ‘Girl’s Aloud” fame, who was also included in my sketch. I had to return another day to get her to sign it because, as Ben explained, with a young baby she needed all the rest she can get so didn’t come out between shows. However the night returned it rained and my untrustworthy umbrella lived up to it’s status. That didn’t deter Kimberly, who signed through the drops with the spirit-based sharpie which slipped over the damp paper without a smudge.