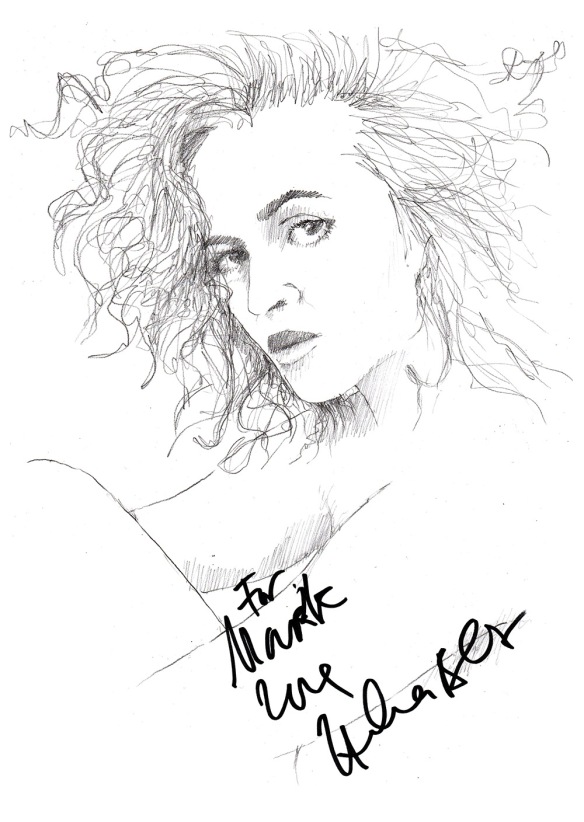 The exquisite Helena Bonham Carter is one of the best in the business on and off the screen. On the many occasions that I have met her she has always been lovely and taken the time to not only sign, but talk to you.

She was the reason why I attended the UK premiere of Kenneth Branagh‘s Cinderella at London’s Odeon Cinema in Leicester Square this week. The two time Academy Award nominee and BAFTA winner plays the Fairy Godmother and it was going to take a bit of magic to get Helena’s sig on my sketch. I usually try and position myself near the drop off area where most of the celebrities hop out of their vehicles and start signing before heading to do the obligatory and time consuming media commitments.

I didn’t manage to secure a spot, stuck away from the action in a corner that didn’t bode well for my mission. That proved to be the case as the cast and crew all arrived, signed a few in the drop off zone and moved on, reducing me to a passive spectator, getting ‘graphs but of the photo variety only. As usual Helena was one of the last to arrive.

She was in a van with her family and because of a car behind was moved on a little, alighting near me. She immediately waved her wand, well her sharpie, and started signing just a few metres from my position and more importantly was moving in my direction. Helena has a wonderful array of signatures from a simple triple initials ‘HBC’ to the full ‘Helena Bonham Carter’. For the purist ‘grapher collecting all the variations is a priority. I have been lucky to have acquired a few. Helena spent time chatting with me and signing the drawing with a very nice dedication and “Helena BC x’ and as a magical bonus, initialled my Sweeney Todd book.